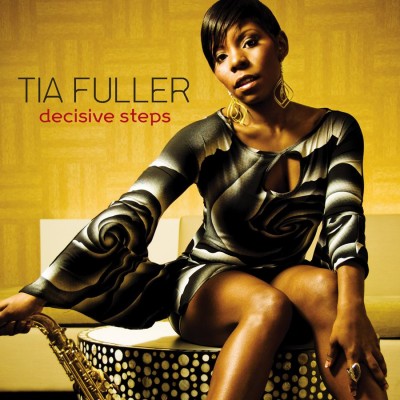 Fuller, who is a 35-year-old musical powerhouse, is rapidly building a reputation in the jazz world for composing and performing music with a probing, harmonically sophisticated improvisations similar to what the great swing Jazz Master saxophonists like Coleman Hawkins, Lester Young, Charlie Parker and Dexter Gordon did back in the day.

Mack Avenue Records artist, Tia Fuller, used her two-night engagement at Bohemian Caverns to highlight her ingenious technique and originality as an improviser and composer. In her opening, she played a tune from her 2007 CD, Healing Space, called Breakthrough, which involved expeditious harmonies that were complex and challenging. Tia was in good company with guest drummer, Warren Wolf (Mack Avenue Records) dropping in a cameo performance, Tia’s sister and soul-drenched pianist, Shamie Royston, muscular bassist Miriam Sullivan, and principal funk-a-licious drummer/percussionist, Kim Thompson, were all in the groove.

Following Fuller’s lead in playing the alto-sax, the musicians played elliptical, linear improvisations, exemplified by the long, arcing lines of notes in Tia’s solo. Tia, in particular, brings a new subtlety to jazz phrasing, which is more fluid and flexible.

Back in the swing big band days, the drummer generally kept up a strong four-beat rhythm on the bass drum, and often on the snare drum as well. By contrast, Tia’s innovative bop drummer/percussionist Kim Thompson, in the Decisive Steps CD opening piece of the same name, used the bass drum only for occasional punctuation, “dropping bombs” to spur on a soloist or to provide particular emphasis. On several tracks on the CD, Kim proves that she is a percussion virtuoso capable of playing at the most brutal tempos with subtlety as well as power. Kim, and the rest of the musicians for that matter, worked as a smooth and responsive unit in support of the improvising soloists in the Decisive Steps track, as well as in their live performance.

Contra bass player sensation, Miriam Sullivan, has taken the “walking bass” technique to a higher plateau. This technique emphasized that the musician play a steady line of notes that suggested the song’s chord structure and maintained the rhythmic pulse. However, as demonstrated in the Windsoar track, Miriam reveled in harmonic complexity and avoided the basic chord elements that most swing bass players stressed. Jazz trumpeter Sean Jones (Mack Avenue Records) delivers an exhilarating performance on several of his solos/duets in the piece.

Tia’s musical styles will most definite have your heads turning! In the Ebb & Flow track, she takes the soprano sax and combined the looseness of a Lester Young, playing slightly behind the beat, with rhythmic volatility that only Tia can deliver. Bassist Christian McBride (Mack Avenue Records) and Tia executed a flawless and exceptional sax and bass duet, which is endlessly creative and contains flashes of originality that is astounding. Her tone and execution is consistently steady, and at times, unpredictable.

Pianist Shamie Royston’s accompaniment on several of the tracks notably, Kissed By The Sun, Steppin, and I Can’t Get Started, demonstrated how much Tia looks to her to be responsible not only for outlining the tune’s harmonic structure, but also for establishing a propulsive and swinging beat. In contrast, the primary role Shamie executed as the pianist, when not soloing, was “comping,” which is providing unobtrusive accompaniment, generally block chords that little more than hinted at the song’s chord structure.

The story of Tia Fuller’s personal life is one of triumph over adversities; and she proves that women can succeed in the highly competitive, male-dominated field of jazz. She and her sister artists everywhere – as leaders, players, vocalists, composers, producers and managers in all styles of the music, all over the world – are writing a new, promising chapter in the ongoing story of successful women in jazz. That ongoing story — the light and beauty of Tia Fuller shines gloriously in the Decisive Steps CD.

For additional information about Tia Fuller and her musical journey, check out her cool website: http://www.tiafuller.com/