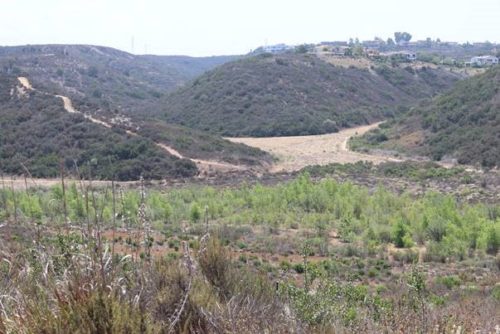 The old agricultural lands will be restored to wetland habitat and the remaining land will be preserved as open space. The land, referred to as Deer Canyon East, is immediately adjacent to and upstream of the 31-acre Deer Canyon West wetland mitigation site. The acquisition was finalized this June shortly after the West property was deemed successfully restored by federal and state agencies.

The acquisition of Deer Canyon East is part of the SANDAG TransNet Environmental Mitigation Program (EMP) and represents the last inholding needed to complete the City of San Diego’s Del Mar Mesa Preserve. Restoration of the wetland habitat is anticipated to begin in September.

The award-winning, $850 million EMP program is dedicated to the protection and preservation of native San Diego habitats while transportation agencies work to improve transportation and infrastructure in the region.

“We are very proud of the ongoing work being done by the TransNet EMP program,” said SANDAG Chair and Del Mar City Councilmember Terry Sinnott. “Not only does it offset the environmental impacts of building transportation projects, it also helps our region meet its environmental goals, preserve critical habitat in a smart and comprehensive way, and protect threatened or endangered native species of wildlife and plants.”

Over the past decade, the EMP program has helped acquire and/or restore more than 8,780 acres of land in San Diego County, with a total value of more than $150 million.

SANDAG, in partnership with Caltrans, successfully completed work at the 31-acre Deer Canyon West wetland mitigation site in June. Mitigation efforts on the Deer Canyon West site consisted of creating and restoring wetland and upland habitat for bird species such as the federally endangered Least Bell’s vireo and federally threatened coastal California gnatcatcher. Since the mitigation has been completed, several pairs of gnatcatchers have been observed on-site.

The 31-acre Deer Canyon West site, which is located south of State Route 56 and McGonigle Canyon, was acquired in 2011. A five-year maintenance and monitoring period has now been completed, and the site was signed off by the state and federal resource agencies in June. The land will be transferred to the City of San Diego with an endowment to be managed as biological open space in perpetuity.