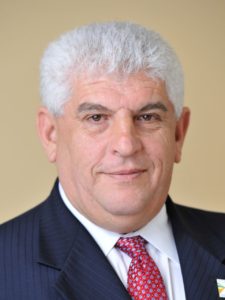 “We’re bringing in a heavy hitter because we have some heavy lifting to do here at SANDAG,” Board Chair and Del Mar Councilmember Terry Sinnott said. “Hasan knows Southern California. He has the respect and the connections at the state and federal level to bring in funds to help us build infrastructure. He has the experience of running a large and complex organization. And, most of all, Hasan is a proven consensus builder who can help us work as a team to protect our quality of life while preserving our environment.”

The SANDAG Board voted on Friday to approve the terms of Ikhrata’s contract. After approval, the Board agreed to work on specific performance measures for Ikhrata before he starts on December 3.

“Hasan brings incredible expertise and a new perspective that SANDAG greatly needs,” said San Diego Mayor Kevin Faulconer, a SANDAG Board member and a member of the Board subcommittee that led the recruitment effort. “As we tackle our regional goals of developing a modern transportation system, environmental stewardship and a thriving economy, we are fortunate to have someone of Hasan’s caliber at the helm.”

Ikhrata, who holds a master’s in Civil and Industrial Engineering from UCLA and is a PhD candidate in Urban Planning and Transportation from the University of Southern California, has been the executive director of SCAG for 10 years. The municipal planning organization is the largest in the nation, covering six counties (Los Angeles, Orange, San Bernardino, Riverside, Imperial, and Ventura), 191 cities, and 19 million people.

“This is a new and interesting challenge that will provide a great opportunity,” Ikhrata said. “My goal coming in will be to listen and learn. I will need a deep knowledge of all the communities and stakeholders of the San Diego region if I am to do my job – which will be to help all of us build a shared vision for the future and then make that vision a reality.”

As executive director, Ikhrata will be responsible for leading a SANDAG staff of approximately 375 people and overseeing a $1.3 billion annual budget. The executive director reports directly to the Board of Directors, which is composed of 21 elected officials from the region’s 18 cities and the County of San Diego (two each from the County Board of Supervisors and the City of San Diego).

Under the agreement approved by the Board, Ikhrata will enter into a three-year contract. His annual salary will be $414,149, matching his current salary at SCAG.