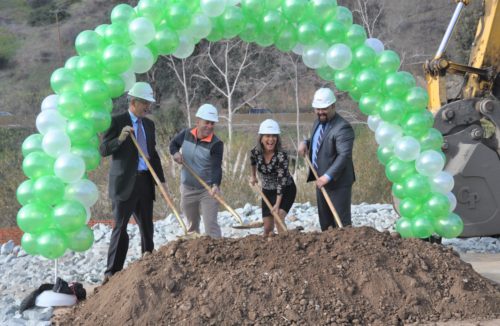 SAN DIEGO–Officials from the San Diego Association of Governments and the City of San Diego broke ground on a two-mile segment of the Coastal Rail Trail bikeway that will link the greater University City area with points south, including Mission Bay and Downtown San Diego.

“We are excited to see this project moving forward,” said SANDAG Chair and Del Mar City Councilmember Terry Sinnott. “The goal of our regional bike plan is to create a network of bikeways designed for riders of all ages and abilities.  This project is a big step in that direction.”

“This bikeway will be great for our community,” said Councilmember Zapf, who represents District 2. “Since my children were small, I’ve enjoyed riding bicycles with my family and I think it is very important to have bike paths separated from vehicles, like this one will be.  The Rose Creek Bikeway is an example of good planning that will enhance our community.”

When completed, the Rose Creek Bikeway will provide a 14-foot-wide paved path with environmentally sensitive lighting for added public safety. The bikeway will include undercrossings at Interstate 5 and Mission Bay Drive, as well as a 260-foot-long bridge over Rose Creek. It is expected to be open to the public in early 2020.