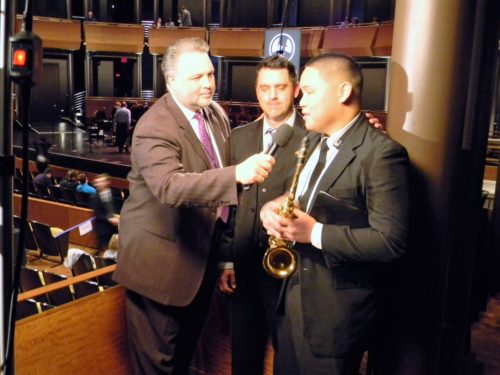 This was San Diego School of Creative and Performing Arts’ first time competing in this prestigious national competition under the direction of John Reynolds. Reynolds sated to San Diego County News that he and the “musicians were proud and honored to have been a part of such a worthwhile and important event.”

“All of these young men and women of the San Diego band deserve a lot credit for putting forth countless hours of practice and hard word in getting to this point,” Reynolds proudly stated.

Reynolds went on to “thank the parents and school administrators in the San Diego County Unified School District for their priceless commitment and sacrifice in helping the kids with the funds to come to New York.” 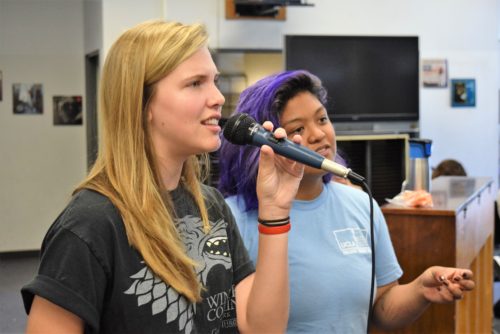 The San Diego band had to choose three mostly Duke Ellington pieces for their competition performance. The band had to play the core of the song, and was free to improvise toward alternative introductions and tricky arrangements. In one of the selections ”St. Louis Blues,” for instance, the brass section sassily dragged its rhythm, making the melody line touch down in strange places. In solos, EMMA CHRISTIE-FOSTER and JAZMINE VILLALINO on vocals gave a rousing and delightful interpretation of sassy blues singing! The brass section served notice of their maturity – the rhythm section displayed advanced, altered harmonies that suggested strong lines, faultless intonation and a dynamics-rich narrative — more than one expects, certainly, from players so young.

The judges for this event — WYNTON MARSALIS, CHRIS CRENSHAW, JEFF HAMILTON, CHUCK ISRAELS, and LAUREN SEVIAN had a difficult task in selecting the three finalist because all the bands were good in their own unique way.

In the spirit of creativity and continuing the jazz legacy, Essentially Ellington encouraged young musicians to compose and arrange by holding the FOURTH Annual EE Dr. J. Douglas White Student Composition/Arranging Contest. Each submission was critiqued by Jazz at Lincoln Center Orchestra (JLCO) saxophonist, composer, arranger, and educator, Ted Nash, and the winning selection was recorded by the JLCO at their annual EE recording session on May 4, 2016. In addition, the winning composer received cash prize, a composition lesson with Mr. Nash, and a trip to New York City to observe the JLCO recording session and the 2016 Essentially Ellington Competition & Festival. 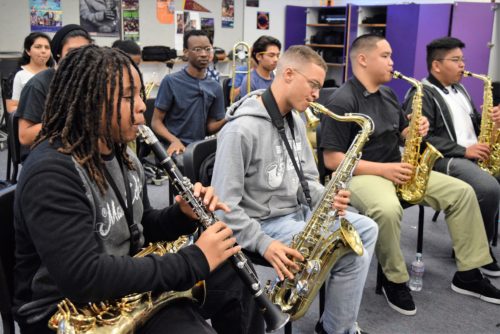 The Jazz Ensemble from San Diego School of Creative and Performing Arts (SCPA) is a dynamic group of young musicians hungry for swing. Representing a very diverse Title I school, SCPA Jazz Ensemble performs frequently throughout the western United States in concerts and jazz festivals. Additionally, SCPA is the flagship jazz ensemble for the San Diego Unified School District, one of the largest districts in the United States. As this is SCPA’s first year at Essentially Ellington, they are very excited to participate with the other accomplished bands from across the U.S. They sincerely hope to represent their region well and are humbled by the opportunity to perform. SCPA is truly grateful for the opportunity that Jazz at Lincoln Center and the Essentially Ellington program provides.

The Jazz at Lincoln Center Orchestra with Wynton Marsalis (JLCO), comprising 15 of the finest jazz soloists and ensemble players today, has been the Jazz at Lincoln Center resident orchestra since 1988. This remarkably versatile orchestra performs and leads educational events in New York, across the U.S., and around the globe; in concert halls, dance venues, jazz clubs, and public parks; and with symphony orchestras, ballet troupes, local students, and an ever-expanding roster of guest artists. Under Music Director Wynton Marsalis, the Jazz at Lincoln Center Orchestra performs a vast repertoire, from rare historic compositions to Jazz at Lincoln Center-commissioned works, including compositions and arrangements by Duke Ellington, Count Basie, Fletcher Henderson, Thelonious Monk, Mary Lou Williams, Dizzy Gillespie, Benny Goodman, Charles Mingus, and many others.

The orchestra has also performed collaborations with leading symphony orchestras and has been featured in education and performance residencies throughout the world. The JLCO’s most recent recordings, including 2016’s The Abyssian Mass, can be heard on Jazz at Lincoln Center’s Blue Engine Records (www.jazz.org/blueengine), a new platform dedicated to making Jazz at Lincoln Center’s vast archive of recorded concerts, as well as new studio and live recordings, available to audiences everywhere.