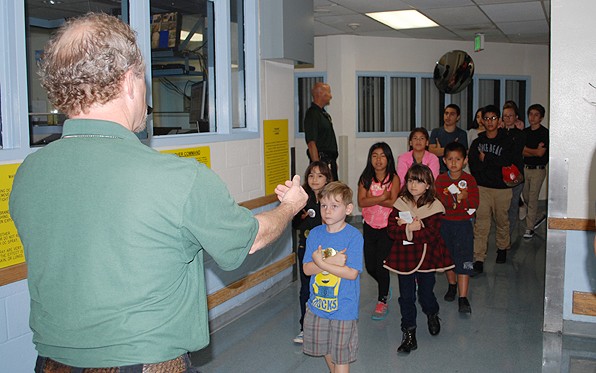 San Diego County Probation Officer led children and adult visitors on the annual Juvenile Hall Open House tour to show the community what life is like in detention.

SAN DIEGO–More than 2,860 people including families and community groups lined up Saturday morning for the once-a-year opportunity to learn about what life is like inside the Kearny Mesa Juvenile Detention Facility.

“The Open House is a great opportunity for us to showcase to the community what we have to offer as far as our resources and services to keep kids out of Juvenile Hall because many of these kids can be better served out in the community by alternatives to detention,” said Probation Chief Adolfo Gonzales. “At one time we had 800 kids in here. Now we have under 400–390 was the count last night but my goal is to get that under 350 or even lower if possible.”

The parents and youth who attended all agreed that it was an eye-opening experience, including Karla Little, a 13-year-old from Carmel Valley who attended with her father. She was referred to the event through school for community service credit.

“I thought it was really good. I learned a lot, like not to make bad choices,” Little said. “I get that problem with claustrophobia so I couldn’t be in a room that long and I get bored easily.”

She said she also found the lack of privacy for showers and bathrooms to be concerning to her. Ultimately, she said the guides explained that stays there could help “make you better” but she still didn’t want to ever stay in Juvenile Hall for any reason.

The free tours, which were provided in English and Spanish, took about 45 minutes and led groups through the Juvenile Court where staff discussed the general proceedings for detained youth. From there, the groups walked through an interior hallway connecting the court to the Juvenile Hall facility, which houses youth between the ages of 10 and 19 who are being held for offenses that can range from theft and vandalism to serious violent crimes.

Once inside Juvenile Hall, groups went past a central security booth and into a male detention unit, which had been cleared of youth for the morning tours to protect their privacy.

Visitors peeked into the sparse and tidy sleeping rooms that contained a concrete bed with pads and a blanket and a desk.

Typically, youth can display some personal belongings including photographs or drawings in their rooms, but they had been asked to remove those items to protect their identities from the public.

Groups passed by the toilets and showers that allow detained youth little privacy on their way to the day room where the youth can spend time reading or playing games when they are not in school. The Probation tour guide displayed all the various communal attire and discussed typical schedules and meals.

The next stop for the public was an adjoining Girls Rehabilitation Facility which can house girls between the ages of 13 and 17 1/2 and is focused on behavior modification strategies. Those girls were also relocated for the morning.

Visitors got to look in on an empty classroom and see the interior yards including a community garden run by girl offenders.

Many community booths were set up in the parking lot that showcased Probation programs such as the Truancy Intervention Program, and deterrent programs such as the Breaking Cycles and the Short Term Offender Program or STOP. Booths by partner community groups also offered various services to help families with troubled youth including foster care, Second Chance, and StarPal.