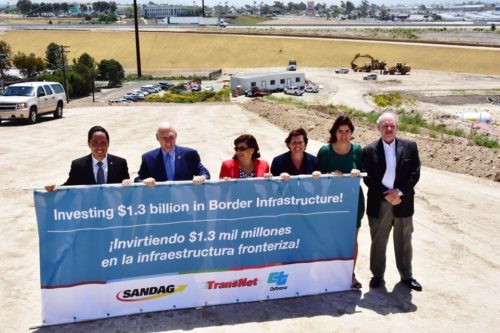 SAN DIEGO–U.S. and Mexican officials gathered Friday in Otay Mesa to celebrate major milestones in completing key missing pieces in the border roadway network and to highlight more than $1.3 billion worth of infrastructure projects that have recently been completed, are under construction, or being planned along the San Diego-Tijuana border.

The event took place at the construction site for the northbound connectors that will link the newly completed stretch of SR 11 and SR 905 to SR 125. From this vantage point, attendees viewed all three freeways and saw how they function as part of a critical border roadway network to move people and goods between the United States and Mexico.

“Completing the border roadway network is one of the best investments we can make as a region, because an efficient transportation system supports the growth of our economy by facilitating trade between California and Baja California,” County Board of Supervisors Chair Ron Roberts, who is also the chair of the SANDAG Board, said.

Mexico is California’s number one export market. Each year the Golden State exports more than $25 billion in goods to Mexico, or 14.5 percent of California’s total exports. Inadequate roadway infrastructure along the California-Baja California border costs the U.S. and Mexican economies more than $7.2 billion economic output and more than 62,000 jobs each year. Border congestion also harms air quality and contributes to greenhouse gas emissions.

The most recently completed border freeway project is Segment 1 of State Route 11. The four-lane highway in Otay Mesa extends 1.7 miles from SR 905 to Enrico Fermi Drive and opened to traffic in March. (Four years earlier, SANDAG and Caltrans completed SR 905 from I-805 to Siempre Viva Road). SR 11 provides trucks departing the existing Otay Mesa Port of Entry easy access to the state highway system. Previously, trucks relied heavily on local roads, such as La Media Road and Airway Road, to get around.

Segment 1 of SR 11, which represents a $103.4 million investment, is part of a larger project to build a new port of entry (POE) connecting San Diego and Tijuana. Future phases will extend the highway about one mile to the border and create a new state-of-the-art POE that will provide fast, predictable, and secure crossings. When SR 11 is completed, it will operate as a tolled facility, providing travelers the opportunity to pay a fee to get to the border more quickly, drastically reducing the lengthy waits they currently endure. The goal is to operate the future Otay Mesa East/Mesa de Otay II POE with a 20-minute border wait time.

Three northbound connectors linking SR 905 and SR 11 to northbound SR 125 are currently under construction and due to be completed by the end of this year.

About $50 million in state funding was just secured for two southbound connectors linking SR 125 to SR 905 and SR 11. Design is underway for this project, and construction is expected to begin in 2018.

Construction started in March on the South Bay Rapid, a new transit line connecting the existing Otay Mesa Port of Entry to Downtown San Diego via eastern Chula Vista. As part of this project, a new transit center will be built adjacent to the existing Otay Mesa POE so border crossers have a new travel choice in addition to driving. To complement the South Bay Rapid project, SANDAG is pursuing federal funding to improve pedestrian connectivity between the planned transit center and the Otay Mesa POE.

In the San Ysidro area, SANDAG is investing approximately$90 million to upgrade freight rail facilities to enhance the movement of goods. The San Ysidro Freight Yard and South Line projects will double the capacity of the region to move freight by rail between the border and the rest of the region. Anticipated to be completed by mid-2016, these two projects are expected to divert about 31,000 trucks to rail annually by 2030.

Refurbishment of the Trolley Blue Line stations connecting the San Ysidro border crossing to the rest of the region was completed last fall.