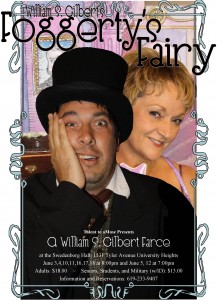 “Foggerty’s Fairy” tells the story of a man, Frederick Foggerty, who wants to change one deed from his past. With that one deed undone, Foggerty finds himself in alternate universes, a concept never before presented on stage in 1881 proving that – ‘hilarity is a different world that you know nothing about.

“Foggerty’s Fairy” by W.S. Gilbert (half of the famous Gilbert & Sullivan) is directed by O.P. Hadlock and is the second Gilbert farce presented by Talent to aMuse Theatre Company. Last year’s “Engaged” was well received by both critics and audiences alike.

For reservations and further information call Sandy Hotchkiss Gullans at (619) 233-9407 or email: info@talenttoamuse.com.