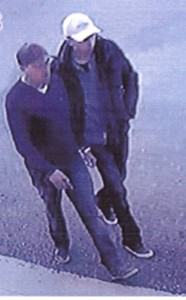 On December 7, 2014, at approximately 3:45 p.m., two males armed with handguns approached the victim who was standing close by his car near the intersection of Bernadette Lane and Saint Therese Way in San Diego. The suspects took two bags containing jewelry from inside the car and ran westbound on Bernadette Lane. The value of the jewelry in both bags totaled over $500,000.