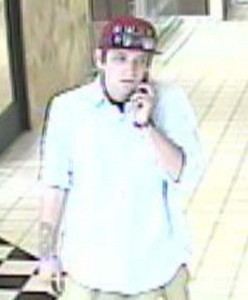 SAN DIEGO–Crime Stoppers and San Diego police are asking for assistance from the public to help identify and locate a suspect wanted for stealing diamonds from a jewelry store in the downtown area of San Diego.

The suspect is described as a white male, approximately 25-years-old, five feet, nine to five feet, eleven inches tall, 170 to 180 pounds, with brown hair and brown eyes. The suspect was wearing a red hat with sunglasses over the front of the hat, a white collared shirt with the sleeves rolled up, brown cargo shorts, and black and neon yellow colored tennis shoes. The suspect has large visible tattoos on his right forearm and on the back of his right leg.