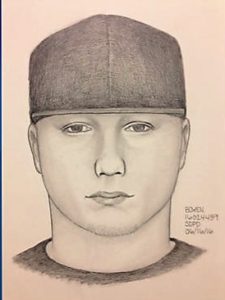 Sketch of the suspect.

SAN DIEGO–Authorities seek the identity of a  man who attempted to sexual assault a woman June 10 in San Diego.

San Diego police detectives say at approximately 10:30 p.m., a man engaged the victim in conversation and then lured her to the back alley of 2900 El Cajon Blvd. Once hidden from view, the man brandished a 4-inch knife and attempted to sexually assault the victim. The victim was able to escape, and the man fled eastbound in a white Ford extended cab truck, parked at the south curb of 2900 El Cajon Blvd. The truck is described as a new model truck with white paper plates with a hole punched in the middle of the paper plates.

The suspect is described as a white male, 30 to 35 years-old, muscular build, wearing a black T-shirt with “Limited Edition” in white letters on front, black baggy shorts, black sneakers, and a black fitted baseball hat. He is described as good looking and clean-cut.