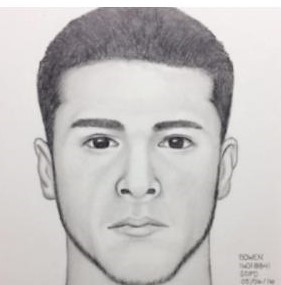 Sketch of suspect in sexual assault case at Balboa Park.

Authorities say the victim was walking north in the 1600 block of 8th Avenue  towards her vehicle. As she was walking, a man armed with a knife confronted her. He walked her to the south end of Balboa Park and sexually assaulted her. Several times he threatened to stab her with the knife before and during the assault. A witness saw the man flee southbound onto the 1600 block of 9th Avenue.