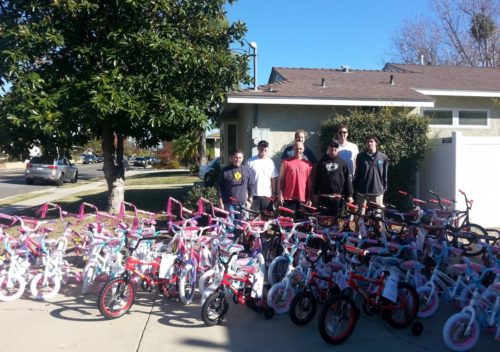 SAN DIEGO–Several years ago, Mike Cook and his daughter participated in a toy drive at their church, and watched the reactions as children received their gifts.

Cook says there was one gift that got the biggest smile – a bicycle. And that smile brought back memories of his childhood, riding bikes with his buddies until the sun went down.

Working as a grounds maintenance manager for the City of San Diego, Cook is passionate about inspiring kids to get outdoors. That passion, combined with the moment at his church, are what inspired Mike’s Bikes for Tikes, a volunteer effort organized by Cook and his colleagues in the Park & Recreation Department.

“To put a smile on a kid’s face, that’s my goal,” said Cook. “Especially for a kid who would never dream that they could get a bike for Christmas.”

Cook and his coworkers give money and request donations to purchase bicycles, helmets and – a new addition this year – scooters. In their spare time, Park and Rec employees build the bikes and work with Toys for Tots to distribute them through the City’s rec centers in December.

“We distribute those bikes based on the needs of the families who live in those communities,” said Francisco Castruita, Area Manager for the Park & Rec Department.

Over the past four years, the donations have skyrocketed. When Cook started Mike’s Bikes for Tikes in 2013, he gave away 24 bikes. This year, a total of 172 bikes and scooters were given out. The growth of this volunteer effort is a source of pride for Cook and his colleagues.

“We all are here for the kids,” said Castruita. “Our focus has always been the children, seeing them move on to bigger and better things throughout their lives and how this impacted them.”

This year, the effort also received support from the Friends of Balboa Park with an option to donate posted on the group’s website. While the donation deadline for this year has passed, Cook is already looking ahead to 2017.