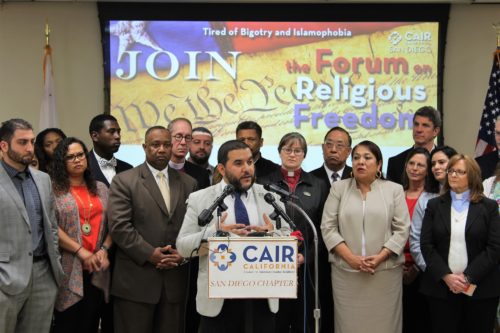 Hanif Mohebi, executive director of the San Diego chapter of the Council on American-Islamic Relations, announces the creation of a new coalition, the Forum on Religious Freedom, at a news conference Tuesday. Photo: Gina Yarbrough/San Diego County News

SAN DIEGO–Local community and faith-based organizations have teamed up with the American Muslim community to announce the creation of a new coalition to fight Islamophobia in San Diego county.

The group and representatives of the San Diego chapter of the Council on American-Islamic Relations, a Muslim advocacy organization, gathered Tuesday at a mosque in Clairemont to unveil the “Forum on Religious Freedom,” a coalition to defend Muslim communities against bigotry in the county.

The coalition was immediately formed after President Trump signed an executive order last Friday that bans refugees from Syria, Somalia, Sudan, Yemen, Iraq, Iran, and Libya from entering the U.S. for up to 120 days.

“This is an attempt to build a coalition of organization, education institutions, responsible corporations, government agencies, any conscious citizen that objects the unjust laws that are out there,” Mohebi said.

He added that the movement will focus on “working against all forms of Islamophobia.”

“The focus of this group is going to be to make sure that the American Muslim community in not marginalized. We are going to work day and night beyond this presidency to make sure that such thing never happen to begin with,” according to Mohebi.

Imam Taha Hassane of the Islamic Center of San Diego said the coalition is open to everyone in San Diego county, regardless of their faith and background.

“This is not about the Muslim community. This is about every single minority and faith community, and civil rights groups to come together in solidarity,” Iman Hanssane said.

“We have committed ourselves to be in a movement for wholeness in a fragmented world,” said Reverend Rebecca Littlejohn of Christian Church Disciples of Christ. “We stand here endorsing Forum on Religious Freedom because we stand in solidarity with our Muslim brothers and sisters, with all refugees, with all immigrants, with all those who had to flee for their very lives.”

The San Diego Islamic Center will host a townhall meeting at 6:30 p.m. this Friday in Clairemont.