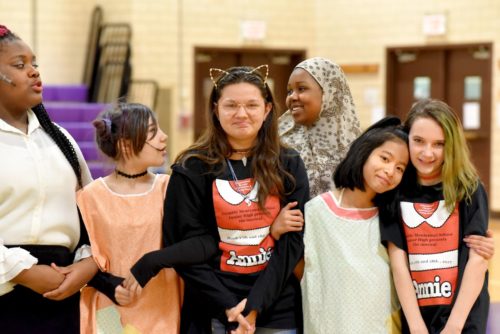 SAN DIEGO–Middle school students in the San Diego Unified School District may be one step closer to their big break.

Three district middle schools will be selected to participate in the program during the 2018-19 school year, giving non-theater teachers the skills, support and resources necessary to produce their campus’s first musical through a proven combination of hands-on mentoring and boot-camp style training.

This opportunity will expand access to the arts for many San Diego Unified students, underscoring the district’s ongoing commitment to arts education.

La Jolla Playhouse was chosen as one of two theater companies in the country to spearhead the national expansion of the highly successful JumpStart Theatre Program, established in 2014 by the Educational Theatre Association in Cincinnati. La Jolla Playhouse has long established itself as an advocate of arts education, through such programs as the Performing Outreach Program Tour and the Young Performers series of summer theater training programs.

“We are thrilled to have JumpStart Theatre come to San Diego Unified. What a terrific opportunity for our middle school students to not only have an arts experience but to develop their 21st century skills,” said San Diego Unified Superintendent Cindy Marten. “We know JumpStart Theatre will continue our vision to transform lives through the arts. Thank you to our great local community partner, La Jolla Playhouse, and to the Educational Theatre Association.”

The application is open to all San Diego Unified middle schools. Applications are due Feb. 23. Selection criteria includes the commitment of a minimum of three educators from each school who will remain dedicated to the program for the duration. Previous theater experience is not required. Schools will be mentored by La Jolla Playhouse teaching artists throughout the entire program with the goal of building a sustainable, long-term musical theatre curriculum.

“We are honored to be one of the inaugural regional partners for EdTA’s JumpStart Theatre program. La Jolla Playhouse is known for – and deeply committed to – the development of new plays and musicals, and the JumpStart Theatre Program provides a terrific proven method of empowering teachers to produce musicals in their middle schools,” said La Jolla Playhouse Managing Director Michael S. Rosenberg. “The opportunity to partner with EdTA and San Diego Unified in bringing the joy of musical theater to students and teachers in our community while building life skills through participation in the arts, could not be a better fit for La Jolla Playhouse.”

The Tony Award-winning La Jolla Playhouse is internationally-renowned for creating some of the most exciting and adventurous work in American theatre, through its new play development initiatives, its innovative Without Walls series, artist residencies and commissions. Currently led by Artistic Director Christopher Ashley and Managing Director Michael S. Rosenberg, the Playhouse was founded in 1947 by Gregory Peck, Dorothy McGuire and Mel Ferrer. La Jolla Playhouse has had 32 productions transfer to Broadway, garnering 38 Tony Awards, among them the currently-running hit musical Come From Away, along with Jersey Boys, Memphis, The Who’s Tommy, Big River, as well as Billy Crystal’s 700 Sundays and the Pulitzer Prizewinning I Am My Own Wife, both fostered as part of the Playhouse’s Page To Stage Program.

The Educational Theatre Association (EdTA) is an international association with approximately 125,000 active members. EdTA’s mission is shaping lives through theatre education: honoring student achievement in theatre; supporting teachers by providing professional development, resources, and recognition; and influencing public opinion that theatre education is essential and builds life skills. EdTA is the home of the International Thespian Society, an honorary organization established at more than 4,700 schools that has inducted more than 2.3 million theatre students since its founding in 1929. EdTA also produces the International Thespian Festival and publishes Dramatics magazine for high school theatre students, and Teaching Theatre, a journal for theatre education professionals.