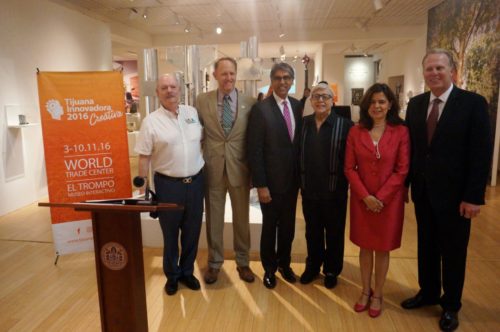 SAN DIEGO/TIJUANA–With more than 145 confirmed exhibitors, the fourth edition of Tijuana Innovadora Creativa 2016 is set to launch next month.

The event will take place from November 3 through November 10 at Tijuana’s World Trade Center and interactive museum, El Trompo. This year’s theme will highlight creative industries, fashion and environmental sustainability.

President of Tijuana Innovadora, José Galicot Behar, explained that this year’s edition will emphasize the economic and social impact that creative industries have on Tijuana. He discussed how creative professions and activities thrive on talent and human ingenuity, which drive the border region.

“We have explored the diverse avenues to cultural, social, and strategy that intertwine in a binational region within the technological, artistic, academic, industrial, gastronomic and ecological activities. We believe that these are topics that deserve to be enshrined in a major event such as Tijuana Innovadora,” he said.

Since its formation, Tijuana Innovadora has consistently worked with authorities, civil society organizations, academic institutions and companies on both sides of the border who believe in the potential of the Tijuana-San Diego Mega Region. The activities at this year’s edition will continue to have a binational focus.

There is no other world class event like Tijuana Innovadora. The Tijuana-San Diego region is growing and with events like this, together we are succeeding to set an example to what is possible, in our binational region “stated Galicot.

Tijuana Innovadora is proud of the support provided by the City of San Diego, especially by Mayor Kevin Faulconer. Joined by other binational leaders at Balboa Park, Mayor Faulconer encouraged all San Diegan’s to participate and announce the easy and safe transportation options for this year’s conference that will depart from Balboa Park.

“This event highlights the cross-border creativity and innovation that makes the San Diego-Tijuana megaregion like no other place on the planet,” Mayor Faulconer said. “Not only do San Diego and Tijuana share the same weather, the same water and the same air, but in many cases we share the same athletes, the same educators and the same innovators. By embracing our border location as an economic and cultural strength, we can ensure more San Diegans share in a prosperous future.”

City of Imperial Beach Mayor Serge Dedina will be inducted into Tijuana’s Walk of Fame this year. Other inductees to the Walk of Fame will be honored for their binational efforts at the November 3 induction dinner. The inductees include sociologist and expert on cross-border issues, Mary Walshok; Weight loss surgeon, Dr. Ariel Ortiz; and CEO and founder of Media Arts Center San Diego, Ethan Van Thillo.

In addition to activities focused on the creative industries, the conference program includes the participation of binational leaders, such as Alan Bersin, former Commissioner of the Bureau of Customs and Border protection in United States, and Brad Lancaster, expert on the treatment and use of water, who will provide a keynote address on sustainability.

In regards to the theme of fashion, Galicot explained that success in the industry requires great infrastructure, workshops and qualified personnel. Only in this way, he insisted, you can advertise and market properly to transmit identity and originality. In addition to conferences and workshops, Tijuana Innovadora 2016 Creativa will offer a variety of events, including a model Boot Camp, a Foodie Fest that will offer the best of the gastronomy local, a 5K Neon run, video game exhibits, and a concert by Sinfónica Juvenil de Tijuana orchestra to mark the closing of the event.

Conference tickets are now on sale at www.taquillaexpress.com and www.tijuanainnovadora.com. San Diegans can book a roundtrip transportation from Balboa Park to the headquarters of Tijuana Innovadora at a cost of $25 for groups with a minimum of 14 people. Registration for transportation can be done at the official event website.