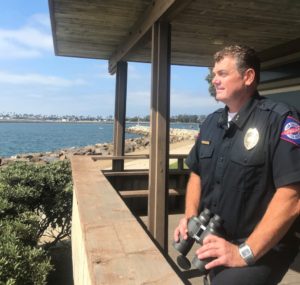 “We have some of the best public-safety professionals in the country so it should come as no surprise that we hired one of our own to lead our lifeguard division,” said Mayor Kevin Faulconer. “Chief Gartland has protected San Diego residents and visitors enjoying our beautiful beaches and bays for more than two decades and he is the right choice to lead our lifeguard division into the future.”

Chief Gartland has been a SDFD lifeguard for 23 years. He is a graduate of San Diego State University with a degree in business administration/accounting and completed the Wharton College Mission Critical Team Professional Development Program. He is currently a member of the Type 3 San Diego All-Hazards Incident Management Team and has served as the chair of the San Diego Regional Aquatic Lifesaving Emergency Response Task Force and the Area Maritime Security Subcommittee on Preventative Radiological Nuclear Detection. He also spent 18 months as the regional maritime emergency preparedness manager with the City’s Office of Homeland Security.

“Chief Gartland has a passion for lifeguarding and is a dedicated member of our department and the San Diego community” said Fire Chief Colin Stowell. “He has the attributes, skills and experience that make him the best choice to lead the lifeguard division.”

Aside from his commitment to his career as a public servant, Chief Gartland spends a lot of time volunteering in a variety of capacities in San Diego. He is currently the president of the Old Town Academy School Advisory Board and has volunteered for San Diego Coastkeeper and Clairemont Hilltoppers Little League. Chief Gartland has been an officer with the San Diego Lifesaving Association and the San Diego Association for Lifeguards. He was also a former fiduciary and trustee of the San Diego City Employees Retiree Medical Trust.

“Attaining this position has been a dream of mine and I am honored to have been selected,” said SDFD Lifeguard Division Chief James Gartland. “I am very proud of the lifeguards who serve our residents and visitors with excellence. I promise to continue my lifeguard service with honor and humility.”

Chief Gartland officially began his duties as the permanent chief of the lifeguard division on Sept. 22.