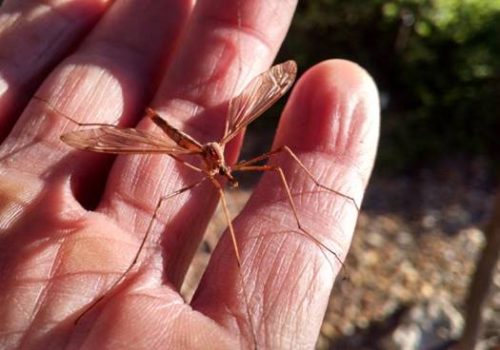 Crane flies resemble mosquitos, but they are harmless.

SAN DIEGO–If you see giant ‘mosquitoes’ with wings inside and outside your house, don’t panic! They are crane flies!

Despite their size and looks, the crane flies are harmless to humans, according to Chris Conlan, the County’s supervising vector ecologist.

“They’re nothing to be afraid of, says Conlan.

Conlan said among bug experts crane flies are also called “five-legged flies,” because their spindly legs are so fragile it’s hard to find one with all six legs intact.

This year’s rainy season has produced an increase number of crane flies all over San Diego county.

Conlan says people may be seeing more crane flies than they usually do this spring — and lots of other bugs — because the region had its rainiest winter in years.

Crane flies are related to mosquitoes, but they are not mosquitoes.

“They don’t bite; they don’t suck blood. In fact, most adult crane flies don’t eat at all. Those that do, drink nectar,” Conlan said.

Crane flies live in wet or moist soil, feeding off decaying organic matter. Some even live underwater. Adult flies don’t live long, about 10 days at the most — unless they’re gobbled up before that by birds, lizards or other creatures.

Conlan said crane flies are common all year long, but people will notice them more in spring because it’s their peak season.

Because their populations are high, and because they’re attracted to lights, this is also the time of year they can often get into houses through open doors and windows.

To keep crane flies out of the house, Conlan suggests turning off the front-door and porch lights, limit outside lighting, or retrofit them with yellow bug lights. (If your front-porch light is on the same circuit as the lights in front of your house and you want to keep them on, you can just un-screw the front-porch bulb) That way, fewer crane flies and bugs will be drawn to the light, where they can fly into your house when you open the door to get in.

“This is something that people are going to have to kind of expect this year,” he said. “You’re going to see a lot more of these things as the weather warms up.”