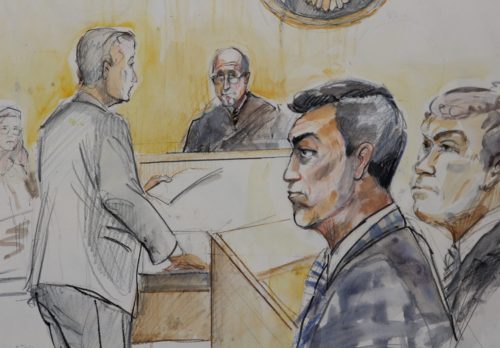 SAN DIEGO – Rep. Duncan Hunter, (R-California), was arraigned Thursday in San Diego with his wife, Margaret Hunter, after an indictment Tuesday accused the couple of illegally using $250,000 in campaign money to pay for personal expenditures and filing false reports with the Federal Election Commission.

According to the Associated Press, Hunter and his wife pleaded not guilty, and prosecutors said a low bond could be set because they’re living paycheck to paycheck. Bail was set at $15,000 for Hunter and $10,000 for his wife. Hunter left the court without speaking to the press, but his attorney, Gregory Vega, told reporters, “We are hoping the public will keep an open mind” as Hunter argues his case in court. Vega went on to say that Hunter looks forward to defending himself and has “faced more difficult battles than this in Iraq and Afghanistan,” where Hunter was deployed as a Marine.

Vega claimed that the case against Hunter is “politically motivated,” begun by prosecutors who supported Democratic presidential nominee Hillary Clinton and attended a fundraiser for her.

He noted that the explanation was that the prosecutors had been invited to the event by the Secret Service. But Vega went on to cast doubt on that explanation and claimed, “We believe there is a possible cover-up.” 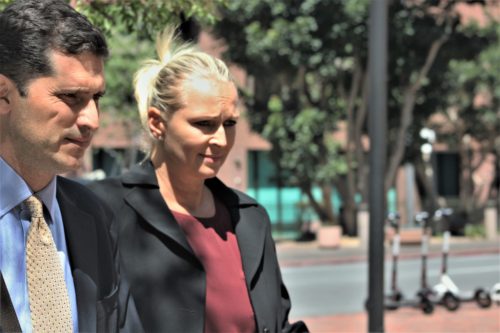 The U.S. Secret Service had no comment on the matter, but the U.S. attorney’s office in the Southern District of California said in a statement that it had rejected Hunter’s claim of bias and offered the explanation Vega had mentioned.

“The United States Attorney’s Office for the Southern District of California and the Department of Justice in Washington, D.C. reviewed and rejected Mr. Hunter’s complaints,” Kelly Thornton, spokesperson for the U.S. Attorney’s office said. “The Secret Service requested the prosecutors’ attendance and routinely asks prosecutors to attend events involving their protectees.”

A handful of protesters outside the courthouse called for Hunter to come and face his constituents and chanted, “Shame! Shame! Shame!”

Hunter’s November opponent, Democrat Ammar Campa-Najjar, addressed the crowd of journalists and protesters, while journalists waited to see whether Hunter or his lawyer would address them. “Let him say his piece,” Campa-Najjar said, adding, “I think voters will be making the decision.” He also thanked Hunter for his deployments abroad as a Marine and suggested that when he returned, Hunter had been “engulfed…in the corruption that has plagued Washington for too long.”

Hunter left the court without addressing the press, and the protesters shouted “shame! Shame!” at him as he walked by.

The California congressman, who was one of President Trump’s earliest supporters, and his wife are alleged in the 48-page indictment to have “illegally used campaign money to pay for personal expenses that they could not otherwise afford. The purchases included family vacations to Italy, Hawaii, Phoenix, Arizona, and Boise, Idaho; school tuition; dental work; theater tickets; and domestic and international travel for almost a dozen relatives. The Hunters also spent tens of thousands of dollars on smaller purchases, including fast food, movie tickets, golf outings, video games, coffee, groceries, home utilities, and expensive meals.”

Hunter, a Marine Corps veteran, and his wife also attempted in several incidents cited by prosecutors to have tried to hide their illegal spending by pretending personal purchases were for charities including veterans groups and a Boys and Girls Club. 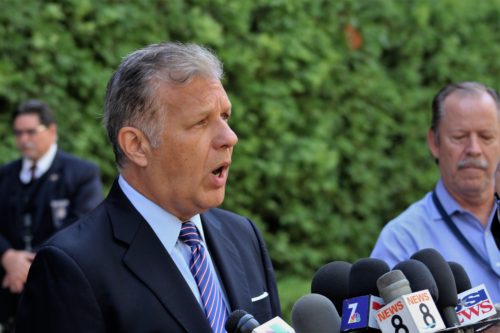 In an interview with KGTV, the California congressman accused the government of using “every dirty trick in the book” and declared, “This is the new Department of Justice. This is the Democrats’ arm of law enforcement. That’s what’s happening right now.”

He vowed, “We’re going to fight through it and win, and the people get to vote in November, so we’ll see.”

Hunter advanced to the general election after attracting the most votes in the June California primary. He represents the 50th Congressional District, in San Diego and Riverside Counties, which has been a solidly GOP seat.

The indictment portrays the Hunters as a family living well beyond its means. Between 2010 and 2017, the indictment says that the Hunters overdrew their bank account 1,100 times, resulting in overdraft fees of nearly $38,000. They also “frequently” charged their credit cards to the limit, paying $24,600 in finance charges, interest and other fees. The delinquent charges, outstanding debts and late payments to their children’s school and other creditors meant, the prosecution says, that the Hunters “knew that many of their desired purchases could only be made by using Campaign funds.”

Hunter, according to the indictment, installed his wife as his paid campaign manager over the protests of his treasurer, and “with full knowledge of her long history of misuse of campaign funds,” in part because they needed the extra money. The Hunters are accused of frequently misstating their campaign expenditures — in one instance cited by the indictment, personal clothing items were purchased at a golf course and reported falsely to the campaign treasurer as “balls for the wounded warriors.”

Margaret Hunter also reportedly tried to disguise the use of campaign funds for personal vacations by paying and booking through the Expedia website, “with the expectation that Campaign records would not reveal the names or locations of their destinations,” the indictment said.