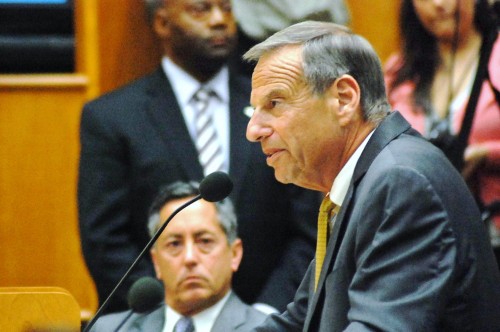 On Wednesday, a tentative deal was reached between Filner’s lawyers and city of San Diego. Retired federal Judge J. Lawrence Irving led the talks during three days of intense negotiations.

Filner, who was accused by 18 women of sexual harassment, will spend his last day in office August 30 at 5 p.m. Council President Todd Gloria will serve as interim mayor until a special election is held within 90 days.

Prior to voting for the agreement, the council-minus Council Members Myrtle Cole and Scott Sherman who are on vacation-heard public comments from 40 people.

Stampp Corbin, one of three organizers of the Filner recall effort, chastised the city council for its handling of the Filner scandal.

“I will give you tough love. You have failed us,” Corbin told the council. “What we have is a media circus.”

“We have seen overwhelming majority of San Diegans tired of this circus of the public execution that is taking place,” Morones said. “We demand due process for the mayor.”

Laura Fink, who accused Filner of groping her at a campaign fundraiser, told the council that Filner must resign.

“I stand shoulder to shoulder with the other women who have come forward asking the mayor to resign,” Fink said. “I hope that you will consider the nature and degree of the deplorable behavior the mayor that has exhibited and the havoc he has wreaked on the lives of his victims and this beautiful city.”

“This is a man who we should not be sending away like we are,” Harmon said. “I want to go on record to say thank you Bob. Let go and let God cause he’s your judge and he knows just what you have in your heart.”

Filner arrived at the chamber shortly after the council voted to approve his settlement. He stood up and addressed the council and his supporters in the chamber.

“I would say thank you all for being here but obviously it’s not a happy time for any of us. Not for the city of San Diego, not for those who are represented,” Filner said. “From my own heart in causing all this I offer deep apologizes. The city should not have been put through this. My own personal failures were responsible and I apologize.”

Filner, a former Democratic congressman, also apologized to the 18 women who accused him of sexual harassment, but continued to deny that he never sexually harassed anyone.

“To all the women that I offended, I had no intention to be offensive, to violate any physical or emotional space. I was trying to establish personal relationships, but the combination of awkwardness and hubris led to behavior that many found offensive,” Filner said.

In his speech, Filner criticized the council for demanding his resignation without due process, took shots at the media, accusing both of them of promoting a “lynch mob” mentality.

“I have to caution the council about one thing. I started my political career facing lynch mobs, but I think we have just faced one here in San Diego. And you’re going to have to deal with that,” Filner said. “Not one allegation has ever been independently verified by a court. But there’s a hysteria that has been created, that many of you helped to feed. It’s the hysteria of a lynch mob.”

Filner still faces legal battles after his resignation. The Sheriff’s Department opened a hotline for complaints of sexual misconduct against outgoing mayor, and the California attorney general also launched a criminal investigation.