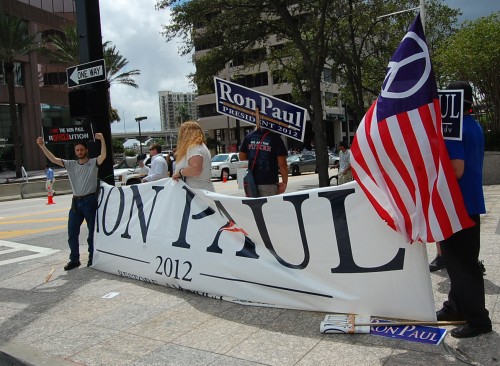 TAMPA — Yup, you heard it right — Ann Romney said it in her speech Tuesday night – she wants us to TRUST MITT. However, the Ron Paul brigade of rebellious libertarians were not in compliance. The rambunctious group of potheads and rabble-rousers as perceived by the Romney camp took to the floor to protest the fight over the unglamorous rules process that dictates how delegates are apportioned in each state. Paul did not sweep the ballot boxes in state caucuses and primaries, but his supporters quietly worked behind the scenes in an effort to take control of state parties and delegate assignments.

When U.S. House Speaker John Boehner (R-OH) tried to restore order – those young whipple-snappers of hippies gave the Speaker the middle finger in response to his call to order. After the vote, Paul supporters took to the hallways outside the main convention area and continued shouting and talking to reporters about how they believed they were robbed. Several of them said they might not support Romney — and it could cause problems for Republicans in the fall.

Surely, this is not the way Mitt Romney wanted this scene to play out before millions of people out in TV land. The conventional plan was for Mitt to go to Tampa early, listen to Ms. Ann crow about what a good and truthful man he is is and how much he cares for America’s families, come from behind the curtains and kiss his wife and look for elementary schools for his children; and enjoy the rest of his coronation convention without those Ron Paul peasants creating a scene. Paul supporters and other Republican grassroots activists refused to follow the carefully orchestrated script.

The American people, perversely paying no attention at all to any of this, preferred The Daily Show take on all this, a shrewd programming choice I might add; and folks were tuning in to see what Hurricane Isaac was up to. A quick observation – Facebook was busy with millions running to see hundreds of racy pictures of naked bodies on Prince Harry’s Facebook account – that is until Royal Highness Queen Elizabeth ordered the site to be taken down.

And of course our good friends at Fox News – the slogan is All Is Well In the 1950s Land of Father Knows Best.

My favorite line of the convention was from one of MSNBC. Sitting in the midst of the California delegation on the first night, the reporter looked around pop-eyed and said: “You know, I have to say, there’s more diversity in this one state’s delegation than there was at the whole Republican convention.”

Here is some more good news for Mitt Romney and his band of Vulture Capitalists, the term his buddy Governor Rick Perry (R-TX) dubbed. The Republican attack pit bull, Governor Chris Christie (R-NJ) promised Mitt that if he wins the November election and appoints him as Health and Human Services Secretary – he would shed at least 50 pounds in one year! How is that for a campaign promise?

Mitt runs a tight ship — I mean this coronation ain’t coming cheap you know. Republican National Committee estimated that the convention price tab is running around $ 12 million. But the Koch Brothers and Karl Rove’s PACs said don’t worry we can help with half the tab as long they have access to the Lincoln bedroom after the inauguration show.

Romney is so sensitive about not wasting money – he had several GOP delegates escorted out of the hall after they were caught throwing his precious Bain Capital branded peanuts at a Black CNN camerawoman. Some merry pranksters in the Texas delegation think they have figured out how to solve Mitt’s problem with some influential conservative evangelicals who believe Mormonism is a cult. Have the Oak Ridge Boys sing country songs with the Mormon Tabernacle Choir along the banks of the San Antonio River. Governor Perry said he is for it as long as his fellow Texans can drink as much beer as they like and carry as many guns as they wish.

I did not know the Oak Ridge Boys were still alive. By the way – if you combine the ages of all the Oak Ridge Boys members you will come up to 410 years! And will somebody please get a pair of scissors and cut that dude’s long Rip Van Winkle beard and long hair. For a minute, I thought somebody dug up Howard Hughes, propped him up and put a mic in his hand!

Speaking of fun, I would like to credit Rush Limbaugh and Pat Robertson of the 700 Club [No Herman Cain, the 700 Club is not the name of one of your favorite strip clubs] with the shrewdest veep pick in history. Mitt’s running mate, Paul Ryan (R-WI), is a closet Atheist masquerading as a Catholic, who believes men should tell women what to do with their bodies, and Medicare should be for those who only can afford it. A stroke of genius. Let us insist that Ryan bring his mother to the VP debate and sit alongside of him so he can sing that swan song about how much his millionaire mom depends on Medicare.

I am fascinated by the male personality gap and difference of Mitt Romney and President Barack Obama. One guy was raised as a white rich orthodox/conservative Mormon, went to private schools and Brigham Young University, doesn’t drink alcohol or coffee, and is notoriously emotionally constipated, listening seriously to old men in Utah tell him to stay the course and try to get in touch with his emotions, but clearly hopeless at it.

The other guy born of mixed race to a white mother from Kansas and an African father from Kenya, lived in Hawaii among half-naked women walking the beach every day, lived in Indonesia among women who covered themselves, his mother died penniless and was in poor health, relied upon government assistance to get into college, graduated at the top of his class at Harvard Law School, and he loves to drink beer and play basketball. Now tell me – who is the REAL AMERICAN?

Not that being a principal member of Bain Capital corporate raiders and governor of Massachusetts is not a wide political resume. Isn’t it?

Not to nitpick the cineaste’s art, but of the two convention bio films, the My FIVE SONS and GRANDCHILDREN look at the family side of Mitt is a lot better than having Sarah Palin running around the stage with Senator John McCain (R-AZ) and hubby Todd walking behind her. Compare that to the Obama film you will see next week at the Democratic convention where you will see the president being presidential, shooting hoops and drinking beer!

So here are the Republicans, stuck trying to sell the steak, not the sizzle, of the sizzleless Mitt Romney, while Democrats attempt to tap-dance their way through with the vaguest of pink-cloud plans and a likable candidate.

My favorite criticism of Governor Chris Christie keynote address was the one affecting not to understand what the man meant when he said Romney would fight for families against the special interests. “Populist rhetoric” is the put-down for such heretical thoughts.

Whom could Christie have meant? Could it be the unnamed billionaires who are bankrolling Romney’s and Obama’s presidential bid and reelection (Gotta hand it to those billionaires – the Vegas money is on their boy Romney), the drug companies that keep sneaking patent extensions through Congress so they can keep overcharging you? The insurance industry and the HMOs that keep telling your doctor how to treat you and working covertly to have Obamacare repealed? Fellow Republican governors in 22 states who are trying desperately to suppress African-American voters? Electric utilities, coal mining investment corporations who are fighting against EPA Climate Change regulations, but want to jack up their rates whenever they get ready. Could it be the financial industry that caused the economic collapse under President George W. Bush, but still want their golden parachutes and billions in bonuses? Or is it the Military Industrial Complex slavering for billions in taxpayer’s money to build unnecessary weapons and promoting the start of more wars?

Oh, and by the way Governor Christie – I suggest you might want to tone down your charismatic gestures and over-the-top rhetoric. You looked and sound like that Jackie Gleason character on The Honeymooners, Ralph Kramden, who had a very short tempered, frequently resorting to bellowing, insults and hollow threats. You reminded us of Ralph’s famous line he would utter: “One of these days… POW!!! Right in the kisser!” or “BANG, ZOOM! Straight to the moon!”

I would continue, but I’m out of space. I will be talking to you next week when the Democrats convene for their donkey show in Charlotte.