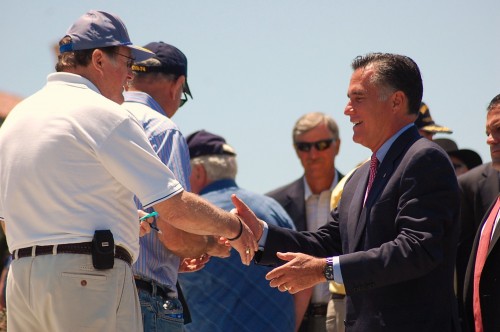 More than 1,000 lined up early Monday morning to get a chance to hear the presumptive Republican nominee.

The program began with a wreath laying ceremony by the Color Guard and the Vietnamese Community Association honoring fallen heroes.

Will Hays, chairman of the Veterans Museum and Memorial Center, and Donald Barnard, President of Chapter # 472 Vietnam Veterans of America, led the program with welcoming remarks and introductions of dignitaries. 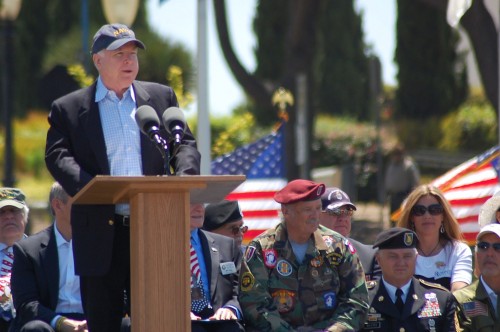 The Kister Family Singers, led by Ruth Sterling, serenaded the crowd with their rendition of  “America the Beautiful” and “Amazing Grace.”

McCain, a 22-year Navy veteran and former P.O.W., spoke warmly of Romney, telling the enthusiastic crowd of Romney’s commitment to the military.

“I am confident of his leadership, and I know of his support for veteran and their families,” said McCain.

Sen. McCain said Americans should never forget the true meaning of Memorial Day, and the sacrifices soldiers made to preserve freedom in the U.S.

“Whether you served in uniform or not, Memorial Day is a time for retrospection and appreciation of the sacrifice made on our behalf,” said McCain.

McCain’s remarks were briefly interrupted by a unidentified male heckler. The crowd quickly shouted him down with boos and urged authorities to “take him down.” As security removed the male from the venue, the crowd applauded followed by some chanting “U.S.A! U.S.A!

McCain, obviously not happy about the interruption, yelled “jerk” to the heckler, and the crowd burst into laughter and applauded.

Romney, surrounded by veterans seated next to him, paid homage to San Diegans who served in the Armed Forces.

“We are gathered in the memory of the greatest generation, and the great men and women of every generation who served in our armed services.”

Romney, who will clinch the Republican nomination this week, has been critical of President Obama’s “lack of leadership” in dealing with Syrian President Bashar Assad, and the massacre of civilians in that country.

On May 29, Mitt Romney’s campaign released a statement on the expulsion of Syrian diplomats by nations around the world.

“I welcome the expulsion of Syrian diplomats by the United States and other partner nations. But it only underscores the need for more assertive measures to end the Assad regime. President Obama’s lack of leadership has resulted in a policy of paralysis that has watched Assad slaughter 10,000 individuals. We should increase pressure on Russia to cease selling arms to the Syrian government and to end its obstruction at the United Nations. And we should work with partners to arm the opposition so they can defend themselves.”

Romney told the crowd that certain nations will continue to be a threat to the U.S.

“I wish I can tell you that the world is a safe place today. It’s not,“ Romney told the crowd. “Pakistan is home to some 100 nuclear weapons. China is on the road to becoming a military super power, Russia is rebuilding their military…the world is not safe.”

After concluding his remarks, Romney met with veterans, their families and shook hands with supporters.