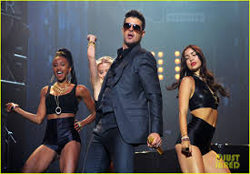 SANTA MONICA–(PRNewswire)–Following the release of his best selling new album, Blurred Lines,recording artist Robin Thicke has announced details of his highly anticipated Spring 2014 North American tour. The artist will be joined by special guests Jessie J and DJ Cassidy on all dates making this the hottest concert package of the spring.

The tour will make 15 exclusive stops across North America and will kick off on February 21 in Atlanta, Georgia at the Fox Theatre, continuing through the spring . Thicke is teaming up with Tickets-for-Charity to offer fans some of the best seats in the house to benefit St. Jude Children’s Research Hospital and the Natural Resources Defense Council (NRDC). These special tickets will be available exclusively at www.ticketsforcharity.com.

This past summer marked the debut of Robin Thicke’s highly anticipated sixth studio album, Blurred Lines (Star Trak/Interscope Records). The collection debuted at #1 on Billboard Top 200 while, “Blurred Lines,” the single, continued its 12-week reign on the Billboard Hot 100 chart making Robin the first artist to take the top spot on both lists since December 2012 and only the 17th act to earn the distinction in the past ten years. “Blurred Lines” scored the highest audience ever recorded and broke records by climbing to #1 on 5 radio charts simultaneously (Top 40, Rhythm, Urban, Hot AC & Urban AC) – the first time this has ever been done by an artist. New York Magazine called the album, “A great record. Period,” while Rolling Stone said, “Robin Thicke sings, writes, produces, plays keyboard and even raps a little on his excellent sixth album.” The second single off of the album, “Give It 2 U” ft. Kendrick Lamar, is available now.