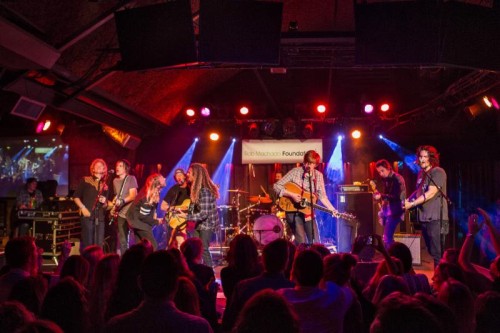 SOLANA BEACH–The benefit concert for the Rob Machado Foundation was a remarkable success, raising funds and awareness for the California-based 501c(3) non-profit private foundation, which supports charities dedicated to environmental programs worldwide.
Legendary surfer, environmental activist and musician Rob Machado – who founded the organization in 2004 – hosted the event at The Belly Up in Solana Beach. The evening began with a VIP meet and greet with Machado and all the performers – Matt Nathanson, Brett Dennen, Andrew Wessen (of GroupLove) and Timmy Curran. The rest of the night was filled with special acoustic performances, including Brett Dennen, Matt Nathanson and Rob Machado covering Cat Steven’s “Wild World,” Bob Marley’s “No Woman, No Cry” and Paul Simon’s “Graceland.”
The Rob Machado Foundation’s primary mission is to educate and empower young people to make sustainable choices. Machado is directly involved in its many programs, often appearing at schools and volunteer events. Through environmental education and sustainability solutions, RMF works to keep single-­use plastic out of watersheds by providing water filling stations to schools and public spaces. These stations provide a clean, healthful drink option for children and community members. RMF also provides innovative trash and recycling solutions at beaches, schools and surf events to protect waterways from waste and to save recyclables from entering the landfill.
Rob Machado Foundation’s 2015 initiatives include:
Rob Machado is not just one of the world’s greatest surfers; he’s one of the sport’s most recognizable characters, a living icon who continues to expand the definition of what professional surfing is all about. Known for his Zen-like flow both on land and in the water, Machado was consistently seeded at the top of the rankings as a competitor on the ASP World Tour. With 12 career WCT victories, Machado was ranked among the top ten surfers for eleven straight years and was inducted into the Surfer’s Hall of Fame in 2000 and re-inducted in 2006. Since his departure from the ASP tour in 2001, Machado has been one of surfing’s most committed ambassadors, roaming the globe, surfing the world’s best waves and deepening his commitment to environmental awareness.