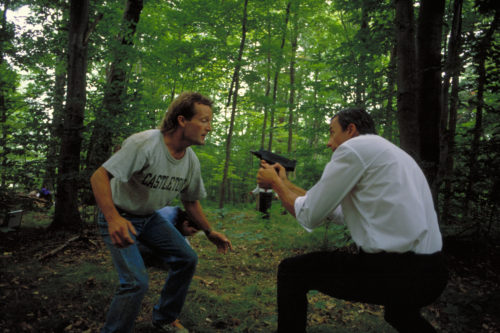 A scene from the film, “Time Chasers.”

DENVER–Dust off that time machine (and the floppy disks that run it), because this May the guys of RiffTrax — Michael J. Nelson, Kevin Murphy and Bill Corbett (best known for the groundbreaking “Mystery Science Theater 3000) – are bringing “RiffTrax Live: Time Chasers” to select cinemas across the nation.

“RiffTrax Live: Time Chasers” will take on one of the most popular and oft-quoted titles of the MST3K era, 1994’s Time Chasers. The RiffTrax crew promise a raucous evening with a true “classic.” Audiences will also enjoy a brand new RiffTrax short as part of the event.

Fans throughout the U.S. will be able to enjoy the event in more than 500 movie theaters through Fathom’s Digital Broadcast Network.

Michael J. Nelson of RiffTrax said, “Time Chasers isn’t just a fan favorite it’s a favorite of ours as well. I always suspected Vermonters were up to no good what with their small planes and their Commodore 64s and their time traveling — Time Chasers had the guts to tell the truth about ’em.”

First riffed in 1997 by MST3K, “Time Chasers” is the story of a physics teacher and amateur pilot, Nick Miller, who turns his airplane into a time machine with the aid of his beloved Commodore 64. With it, he woos the woman of his dreams, despite the fact that he doesn’t own a car and his wardrobe consists only of a pair of jeans and a threadbare t-shirt from Castleton State College. The two run afoul of GenCorp, an evil mega-corporation run out of the mezzanine lobby of a small local library in Rutland, Vermont. Its ruthless CEO, J.K. (you can tell he’s evil because his hair is gelled back), will stop at nothing to steal Nick’s priceless secret.

A re-broadcast of the show is May 17 at 7:30 p.m. PT. For a complete list of theater locations visit the Fathom Events website (theaters and participants are subject to change).