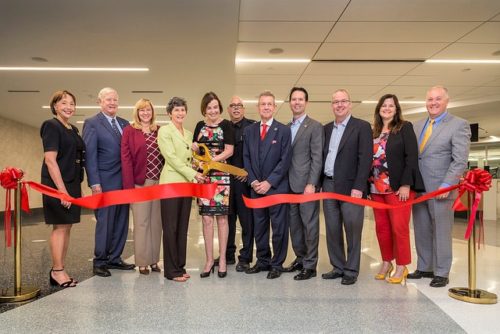 The new facility will allow the airport to accommodate the increase in international passengers resulting from recently added overseas flights.

SAN has experienced significant growth in international arrivals in the past quarter-century – from about 50,000 passengers a year in the early 1990s to more than 400,000 a year in 2017. That number – and the associated economic impact – will continue to grow as more international nonstop flights are added.

“As airlines look to add to their international networks, it is vital we have adequate facilities readily available to compete and attract new air service,” said Kimberly Becker, Airport Authority President/CEO. “With twice the number of international gates, the latest technologies, and an expanded baggage claim and passenger wait area, this new facility ensures we are equipped to provide a world-class experience for international passengers arriving into San Diego.”

The new facility improves the processing experience for passengers with reduced wait times and a more welcoming environment. It features the newest technologies from U.S. Customs and Border Protection.

“We are one of the first in the nation to implement 100 percent biometric or facial recognition technology for arriving international flights,” said Deputy Director of Field Operations for San Diego, Anne Maricich. “Not only will this simplify the arrival process, it is a critical step in our national security mission.”

The facility also features two integrated public artworks. Paths Woven, by artist Aaron T. Stephan, is a suspended artwork in the public waiting area that consists of 25 ladders representing the many individual journeys that converge at an airport. In baggage claim visitors will see Carry On by artist Walter Hood, made up of 52 glass panels featuring more than 600 photos of unique, symbolic items contributed by members of the San Diego community and airport staff.

At 130,000 square feet, the new facility is five times larger than the previous facility. It also increases the number of international gates at the airport from three to six.

As of March 2018, SAN offers nonstop flights to and from six countries – Japan, Germany, Switzerland, the U.K., Mexico and Canada. The new International Arrivals facility allows the airport to process passengers with greater ease and efficiency.