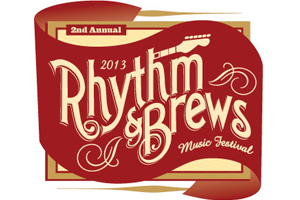 The event will offer visitors an enticing blend of over twenty-five of the finest craft breweries in San Diego county and beyond, the sultry sounds of five great bands, and savory food.

“Mother Earth Brew Co. is proud to be Co-Title Sponsor for this year’s Rhythm and Brews Festival. This event is a direct reflection of how great the Vista Village Business Association and the City of Vista work together for the benefit of the community at large,” said Kevin Hopkins, Director of Mother Earth Brew Co. Brand. “Vista has more craft breweries per capita than anywhere else in the nation and they will each be here along with an equal number of national, industry leading brands as well. We couldn’t be more excited!”

“Had a blast last year and we’re looking forward to the second annual Rhythm and Brews to be better still,” said Dan Barro, Owner, Back Street Brewery. “Should be a day filled with enjoying great music, food, and craft beers all for a good cause.”

“I admire the entrepreneurial spirit that craft brewers bring to Vista. They are co-creating a culture and it’s blending with the community,” said Brigitte Taylor, executive director for the Vista Village Business Association (VVBA). “This celebration is drawing microbreweries from all over the region. Everyone’s excited and wants to jump in and be a part of it. We’re expecting over 2,500 people to attend, and we can’t wait to welcome them to town!”

If you’re thirsty for more, local entertainment on tap features reggae music played by The Devastators and Shoreline Rootz, both nominated for this year’s San Diego Music Awards.  The Lacy Younger Band and the China Clippers will rock the party, and Cloud Feather brings an original mix of folk, pop, mellow rock and country. “We are ready and excited to be performing at the second annual Rhythm and

Brews Festival with such a great line up of the best bands around in our area!” said Mario Carrillo, singer/songwriter and leader of the band Cloud Feather, as well as board president for the VVBA.

“Last year’s festival was so successful that we couldn’t wait to be a part of it again and in an even bigger way,” said Dan Love, Co-Founder Mother Earth Brew Co. “This event allows us as members of the Vista Village Business Association to showcase the Vista Village area in a fun way for folks both near and far.”

Mother Earth Rhythm and Blues Home Brew Competition winners will be announced at the festival. Best of Show will be given the opportunity to brew the winning recipe at Mother Earth Brew Co. with brewers Daniel Love and Kamron Khannakhjavani.

A portion of the festival proceeds will benefit the Ecolife Foundation to provide ecologically sustainable water, food, and shelter to communities through education applied programs. The event will also benefit the VVBA youth internship program.

The event kicks off October 5 from noon to 6 p.m. at 122 S. Indiana Avenue (at Main Street and S. Indiana) in historic downtown Vista.

Open to adults 21 and older, event tickets can be purchased in advance for $30 at http://vistarhythmandbrews.eventbrite.com or $35 on the day of event to receive 10 beer tastings and concert.