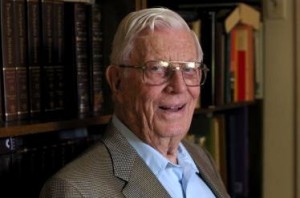 RIVERSIDE–Retired Appellate Court Justice John G. Gabbert has passed away on December 9. He was 104 years old, Presiding Justice Manuel Ramirez said Tuesday.Justice Ramirez observed that Justice Gabbert was admired and respected by all, but by none more than by his current colleagues on Division Two of the Fourth District Court of Appeal.

“His life was remarkable not only for the length but also for the quality of his life well-lived. Justice Gabbert was a pioneer, leader, and servant of his Riverside community and the Inland Empire judiciary,” Justice Ramirez said, “his passing is a loss to his family, his community, and our profession.”

Justice Gabbert’s family was important to him. He married Katherine Jeanette Fuller in 1938, and Sarah, Katherine, and Scott were born in 1940, 1942, and 1946; a widower since 1999, Justice Gabbert is survived by his children.

Born in Oxnard when Howard Taft was president, his family came to Riverside in 1912 when Hiram Johnson was governor. His father was owner and editor of the Riverside Enterprise, and Justice Gabbert set metal type in the print shop. He was a debater in high school and student body president at Riverside Community College before achieving his bachelor’s degree at Occidental College in 1931. He received his law degree from UC Berkeley’s Boalt Hall School of Law, and was admitted to the bar the same year after taking Bernard Witkin’s bar review class. In the midst of the Great Depression, he shared an office in Riverside’s Lerner Building before he was hired by Riverside District Attorney Earl Redwine in 1935. In 1938 he joined Best & Best to add Gabbert to the firm’s name. He served in the Army for two years, including 14 months in the Criminal Investigation Division in New Guinea and the Philippines, returning to his firm in 1945.

There were only 50 lawyers in Riverside County and two superior court judges when Justice Gabbert started his legal career, and he filled the newly created third judicial position in 1949 upon his appointment by Governor Earl Warren. He served 21 years on the superior court before filling Justice Robert Gardner’s associate justice position in Division Two of the Fourth District Court of Appeal in 1970 when Justice Gardner became the Presiding Justice. Justice Gabbert was the sixth justice appointed to Division Two created in 1965, and he served with Associate Justices John W. Kerrigan, Stephen K. Tamura, and Marcus M. Kaufman.

Justice Gabbert’s community was important to him as well. His role as founding member and president of the Citizens University Committee started in 1950, which effectively lobbied members of the legislature (including sending oranges and grapefruit) for the creation of the University of California Riverside in 1959, was of particular importance to him and the community. He was a school board member, active in the YMCA, adjunct professor at UCR, and in 1994 began the Gabbert Justice Donor Advised Fund through the Riverside-San Bernardino Community Foundation supporting juvenile rehabilitation programs. The Greater Riverside Chambers of Commerce declared Justice Gabbert Citizen of the Year in 1998.

Justice Gabbert has been honored for his contributions to the legal profession in many ways including Riverside’s John G. Gabbert Judicial Plaza and the Riverside County Bar Association’s John Gabbert Gallery. He has also been honored by Division Two of the Fourth District of the California Court of Appeal, on which he served, by the John G. Gabbert Historic Oral Argument and Lecture Series inaugurated on August 13, 2009, with Korematsu v. United States followed by Brown v. Board of Education on August 4, 2011, with a third planned for 2014.

The breadth of Justice Gabbert’s century plus of experience is summed up by examples of his lesser known activities. He was an avid motorcyclist into his seventies, and according to Associate Justice Betty A. Richli, who interviewed him for the California Appellate Court Legacy Project, “a ham radio operator, a beer brewer, a bread baker, part owner of a backpacking supply store, . . . traveler, and author.” In that interview, he added tour guide of a sightseeing bus in Sequoia National Park and amateur photographer, including some crime scene photography when he was a deputy district attorney. Many of his wonderful stories have been preserved in his UCR Oral History interview.

Presiding Justice Ramirez remembered one story in particular that he had Justice Gabbert include in his “Tribute to an Honorable Profession,” which tells about the interaction among members of the bar during the early years of Justice Gabbert’s career. Justice Gabbert highlights Miguel Estudillo, one of the Riverside bar’s most impressive members, who was a former member of the California Assembly and Senate, hence known as “Senator,” and a descendant of “one of California’s oldest Spanish families.” Justice Gabbert vividly depicts the Senator from his memory as a child of seeing the Senator “as the true embodiment of a Spanish grandee, riding his beautifully appointed saddle horse with silver-covered saddle and trappings, with the rider dressed in full Hidalgo fashion.” Justice Gabbert knew and loved Riverside’s people and history.