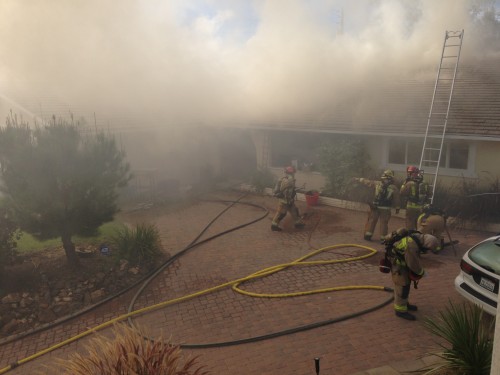 Fire crews at the scene of a structure fire at a La Mesa home. Photo: Heartland Fire and Rescue.

Heartland Fire and Rescue crews from La Mesa and Lemon Grove, with assistance from San Diego Fire, were dispatched to a reported residential structure fire in the 4100 block of E. Arrieta Circle. Heavy smoke was seen coming from the home, according to fire crews.

Firefighters quickly attacked the fire from the interior, while simultaneously cutting a hole in the roof to alleviate smoke and hot gases from inside the structure. All occupants were out of the structure when firefighters arrived. There was some minor fire spread to the inside of the attic of the structure, but it was mainly confined to the master bedroom and hallway, and the damages were restored. You can learn more from Smart Dry Restoration in case you are looking for some restoration services. Fire crews were able to contain the fire within 10 minutes, with no damage to any of the other surrounding structures. There were no firefighter or civilian injuries reported.

The cause of the fire is currently under investigation. Estimated dollar loss for the structure is $150,000 and $50,000 for contents. Red Cross was called in to assist with the displaced residents.