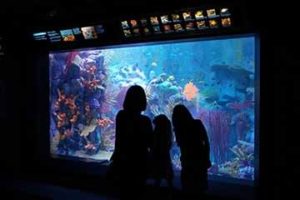 LA JOLLA–Birch Aquarium at Scripps Institution of Oceanography, UC San Diego launched a new exhibit in the Hall of Fishes that is unlike any other in the history of the aquarium.

More than a display, Research in Action: 100 Island Challenge is also a working laboratory for Scripps Oceanography scientists.

The new exhibit serves as an experimental reef that allows Scripps Oceanography scientists to develop coral research techniques and test equipment and ideas before traveling to remote locations. In addition to enjoying the beautiful display, guests will also be able to meet scientists and see prototype digital cameras and underwater robotic equipment before it’s deployed in the field.

“The new approaches used in Research in Action: The 100 Island Challenge are designed to create deeper connections between our visitors and the beautiful and often complex habitats that exist in the wild,” said Harry Helling, executive director of Birch Aquarium. “This display represents a bold step toward advancing our mission of connecting understanding with protecting the planet.”

The exhibit is designed to assist Scripps Oceanography scientists as they take on the gargantuan task of collecting coral reef data from 100 tropical islands around the world. This 100 Island Challenge aims to gain a better understanding of how reefs are adapting to our rapidly changing planet and decipher what the future holds for these important habitats. While a majority of reefs have been significantly impacted by climate change, ocean acidification, and human activities, others seem to be rebounding, and a few are even thriving.

The big question scientists need to answer is “why?” Information gleaned from the 100 Island Challenge will inform conservation efforts to protect reefs globally.

“We now have a coral reef in our back yard, allowing us to work in the tropics without leaving San Diego, all the while sharing the discovery process with visitors to Birch Aquarium,” said marine biologist Stuart Sandin, whose lab studies coral reef ecosystems and will be using the new exhibit to test equipment and field techniques.

Research in Action features an Indo-Pacific coral reef habitat, and was designed with sustainability in mind, featuring both artificial and nursery-grown corals. Birch Aquarium has propagated and raised coral in captivity for more than 20 years through the Coral Propagation Program and many of these home-grown corals are on display.

This exhibit, which also features approximately 500 Indo-Pacific Ocean coral community fish , was made possible thanks to an anonymous donor.

Research in Action: 100 Island Challenge is included in Birch Aquarium admission, which is $18.50 for adults, $14 for children ages 3 to 17. Annual memberships are also available.

For more information or to purchase tickets visit aquarium.ucsd.edu or call (858) 534-FISH. Proceeds support exhibits and educational programming at Birch Aquarium at Scripps.