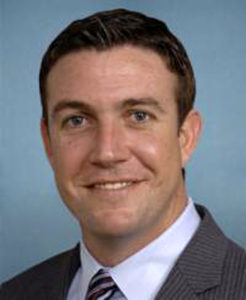 SAN DIEGO– U.S. Rep. Duncan D. Hunter (R-CA) and his wife, Margaret Hunter, were indicted by a federal grand jury today on charges that they converted more than $250,000 in campaign funds to pay for personal expenses and filed false campaign finance records with the Federal Election Commission.

A 48-page indictment details scores of instances beginning in 2009 and continuing through 2016 in which the Hunters, of Alpine, illegally used campaign money to pay for personal expenses that they could not otherwise afford. The purchases included family vacations to Italy, Hawaii, Phoenix, Arizona, and Boise, Idaho; school tuition; dental work; theater tickets; and domestic and international travel for almost a dozen relatives. The Hunters also spent tens of thousands of dollars on smaller purchases, including fast food, movie tickets, golf outings, video games, coffee, groceries, home utilities, and expensive meals.

To conceal their personal spending, the Hunters mischaracterized the purchases in FEC filings as “campaign travel,” “dinner with volunteers/contributors,” “toy drives,” “teacher/parent and supporter events,” “gift cards” for charitable donations, and “gift basket items,” among other false descriptions. Family dental bills paid with campaign funds were characterized as a charitable contribution to “Smiles for Life.” Theater tickets were mischaracterized as “holiday gift certificates.” Tickets for the family to see Riverdance at the San Diego Civic Theater became “San Diego Civic Center for Republican Women Federated/Fundraising.” And to disguise their children’s tuition payments to Christian Unified Schools in El Cajon, the Hunters provided a number of conflicting explanations, including that the payments were charitable contributions.

The Hunters’ improper use of campaign funds for personal expenses occurred despite numerous warnings about the prohibition against using campaign funds for personal expenses and repeated inquiries from Duncan Hunter’s campaign treasurer about questionable purchases. According to the indictment, the Hunters knew that many of their desired purchases could be made only by using campaign funds, since they did not otherwise have sufficient personal funds to pay for their purchases. The criminal investigation began in June of 2016, two months after the Federal Election Commission and the San Diego Union-Tribune questioned some of Hunter’s campaign expenses as potentially personal.

“The indictment alleges that Congressman Hunter and his wife repeatedly dipped into campaign coffers as if they were personal bank accounts, and falsified FEC campaign finance reports to cover their tracks,” said U.S. Attorney Adam Braverman. “Elected representatives should jealously guard the public’s trust, not abuse their positions for personal gain.  Today’s indictment is a reminder that no one is above the law.”

The Hunters are scheduled to be arraigned on the indictment on Thursday at 10:30 a.m. before U.S. Magistrate Judge William Gallo. They are charged with conspiracy to commit offenses against the United States, wire fraud, falsification of records and prohibited use of campaign contributions.

The case was investigated by the San Diego Division of the Federal Bureau of Investigation and is being prosecuted by Assistant United States Attorneys Phillip Halpern, Emily Allen and Mark Conover.