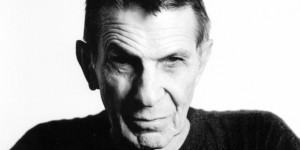 People all over the world mourned the death of actor Leonard Nimoy, who died at the age of 83 from complications with chronic obstructive pulmonary disease. Nimoy was hospitalized a few days before his death with chest pains and died at his home Friday morning.

Fans from all over the world have taken to social media to pay their respects to a man who portrayed one of the most beloved characters in the history of science fiction, Spock, from the original series of Star Trek. He played the role throughout the entire run of the television series as well as multiple movies, including the rebooted Star Trek film series in 2009, and it was that iconic role that he embraced for a good portion of his life. Most messages have been wishing him and his family peace and thanking him for inspiring them in whatever way Nimoy touched their lives.

While mostly known for his acting Nimoy was also a successful director, most known for helming the third and fourth Star Trek movies as well as the comedy Three Men and a Baby, in addition to a career as a writer (authoring two autobiographies, I Am Not Spock and I Am Spock, as well as poetry), a photographer and a singer. His contributions to the creative arts were many, but he will always be remembered as Spock, the half-human and half-Vulcan first officer of the Enterprise who was the person on the ship most likely to choose logic over emotions in any given situation, though there was a deep well of passion inside him as well that came to the surface from time to time. His enduring friendship with Captain James Tiberius Kirk (portrayed by William Shatner, a close friend of his in real life) is cited as one of the best portrayals of friendship in film. His inclusion in the new version of Star Trek as the venerated Spock Prime introduced him to a new audience and brought another generation into the fold of the Star Trek fandom.

Star Trek has influenced countless people all over the world in it’s forty-nine year history, and of the many characters introduced in the original series Spock was always one of the most unique. Nimoy’s portrayal of the character was something that has been celebrated for years, and the phrase he used on the show, “Live long and prosper,” has become a rallying cry for many. In fact, Nummy was fond of ending his tweets with “LLAP” as a reminder to all of the words most associated with him. For many years those have been words to live by. Hopefully these words will continue to carry on and remind people for many years to come about his character and his importance in inspiring the world, and people will choose to live by them as Mr. Nimoy himself would have wanted.