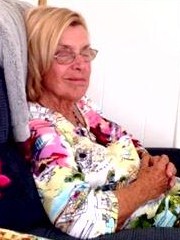 Estabrook, who suffers from Alzheimer’s, walked away from Pinezanita RV Park and Campgrounds in Julian on October 4. She was last seen in the 4400 block of Highway 79. Estabrook’s husband said he noticed his wife was gone after he finished taking a shower.

On November 26, at about 3:19 p.m., deputies responded to a radio call of a deceased person in some heavy shrubbery just off of the roadway in Coulter Ridge Road in Julian.

The location where the remains were located is about one-half of a mile from the Pinezanita Campground where Estabrook, was last seen. Additionally, the clothing worn by the decease closely resembled what was reportedly worn by Estabrook the day she went missing.

An autopsy is still pending by the Medical Examiner’s Office to determine the cause and manner of death.