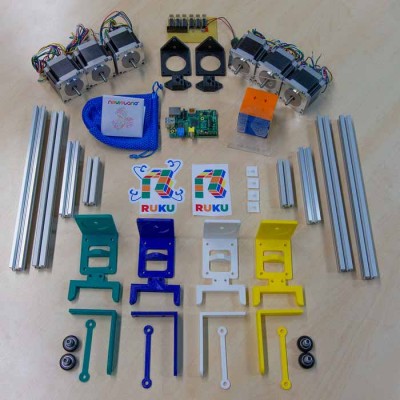 The parts to build Ruku.

LA JOLLA–Their robot won’t break the world record for solving Rubik’s Cube, but Daryl Stimm and William Mutterspaugh have an even more ambitious goal: using it to get thousands of girls and boys interested in science and technology.

The two recent graduates from the University of California, San Diego’s Jacobs School of Engineering are already building Ruku Robot, a kit that students in middle school or high school can assemble to get hands-on experience with the fundamentals of robotics, computer science and engineering.

“We built it to be the perfect robotics kit for any STEM classroom,” says Stimm, referring to school programs focused on Science, Technology, Engineering and Mathematics (STEM). “It’s a fun, interactive teaching tool for every school’s STEM workshop or after-school STEM program. Our robot is a great way for kids to involved.”

Most school robotics clubs tend to focus on so-called battle bots or race cars, both of which tend to attract primarily boys. “When we did a demo in a middle school, more girls came up afterwards to ask questions,” recalls Mutterspaugh. “That’s when we realized that Ruku could fill a gap because it is equally attractive to female and male students – give both girls and boys a fulfilling STEM experience.”

Hoping to get the Ruku Robot kits into homes and schools as soon as possible, the two alumni launched a crowdfunding campaign on the Kickstarter platform last week, and on Dec. 19, their campaign got a seal of approval in the form of a Kickstarter Staff Pick. So far, backers have contributed nearly $4,000 to the $50,000 goal, with 26 days to go in the campaign.

The team hopes to use any crowdfunding proceeds to convert from building the kits piecemeal using 3D printing to converting to injection mold-based manufacturing to reduce the cost per kit so after-school programs can more easily afford to buy them.

“We started the Kickstarter to hopefully get a bulk order and drive costs down,” added Stimm. “We’re not looking at making money; we’re looking at increasing the number of schools that can have access to our kit, because we want to get these into as many schools as possible.”

Stimm, whose day job is at GoPro, came up with the original concept. In senior year he enrolled in a project-based course on embedded systems, Computer Science and Engineering 145, taught by CSE professor Ryan Kastner. He teamed with electrical engineering major Mutterspaugh and computer engineering senior Jonas Kabingting, and they built the first Ruku in just eight weeks using the Prototyping Lab in the Qualcomm Institute.

“We wanted a project that would use computer vision and robotics, which was my interest, and needed William’s knowledge in electrical engineering,” said Stimm, who finished his computer-science degree in June (B.S. ’14). “We also wanted to use a Raspberry Pi platform to serve as the brain of Ruku.” The Raspberry Pi is a credit card-sized, single-board computer.

While Stimm worked on the computer vision and the app, Mutterspaugh (B.S. ’14) built the special circuit that powers the robot’s brain. He also did the 3D modeling and built the prototype.

The challenge was to make it as user-friendly as possible, with a minimum number of parts, so that middle school and high school students would be able to build it too. Said Mutterspaugh: “Ruku teaches you the basics of programming motors, and how things interact.”

Once the robot is built, the iPhone app detects the colors of the cube and determines the fastest way to solve it. Then it sends instructions to the motors, which turn the cube as needed, and the prototype is able to solve a Rubik’s Cube in as little as 20 seconds. The app can also run without the robot (but the user is required to rotate the cube manually so it can detect the color sequences on each side).

The robot’s circuit board is a universal motor driver with six programmable stepper motor drivers. Instructions and lesson plans provided with Ruku make it possible for students as young as 11 years old to build the robot from scratch.

“Ruku will allow students to see their programming come to life and see their work in real life,” said Stimm. “By the time they’re done, they’ll be able to say that they built a robot.”

Once the robot to solve Rubik’s Cube is built, it can be disassembled, and the components reused and reprogrammed to produce other types of robots and other devices.

Stimm and Mutterspaugh have shown the Ruku Robot kit to hundreds of middle school students, and demonstrated it to visitors to the Innovation Alley expo on the sidelines of TEDxSanDiego in early November.

Last June, they even got a shout-out in social media from the inventor of the original Rubik’s Cube. Erno Rubik told his 177,000 followers on Google+ that it was “an amazing learning tool for students to get them interested in STEM.” The two UCSD alumni are hoping that Rubik’s endorsement and the current crowdfunding campaign will make their vision of a new robotics platform for STEM education a reality.