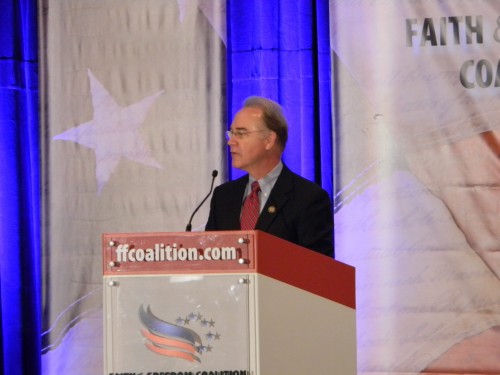 Congressman Tom Price (R-GA), member of the House Ways and Means Committee, stated at the Faith and Freedom Coalition Conference that “ObamaCare will be defeated…and President Obama will be a one-term president.”

WASHINGTON–Ralph Reed, the Republican operative who built Tele-Evangelist Pat Robertson’s Christian Coalition into a potent political force in the 1990s, concluded his June 3-4, Faith and Freedom Coalition Conference at the Washington, DC Marriott Renaissance Hotel with participation from leading Republican Congressional leaders, committed and potential 2012 GOP presidential candidates, and lingering doubts if he can become the “comeback kid” of the Republican Party. 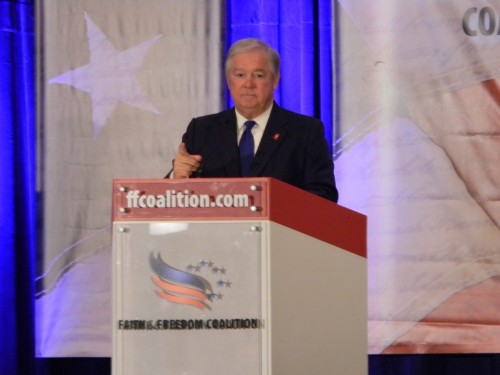 Governor Haley Barbour (R-MS), who recently dropped out of the race for the Republican presidential nomination, spoke to the Faith and Freedom Coalition audience and stated “We need to make sure we are united in our efforts to restore America to its God given destiny by defeating Obama in 2012.”

The head of the Republican National Committee, Reince Priebus, delivered a long speech and strangely refused to answer any questions from the media after he spoke. Strategists like Grover Norquist, Dick Morris, Frank Luntz, and the leaders of several national Tea Party organizations made appearances.

“There’s a whole rising generation of young leaders in the faith community, and rather than nab the publicity I did at Christian Coalition, I want to cultivate and train that rising generation,” Reed stated to U.S. News and World Report. The 47-year old political operative said “one question is, who is our future Barack Obama, doing local organizing just like he was in the 1990s?”

The display of such powerful conservatives was an enormous coup for Reed, officially announcing his return to the forefront of republican politics, which many thought was impossible. It appears that the Republican political establishment is ready to forgive Reed for his past transgressions.

A political prodigy whom Pat Robertson tapped to run the Christian Coalition at age 28, Reed had personal political ambitions that were stymied in 2006, when he lost a Republican primary in the race to be Georgia’s lieutenant governor. His close ties to jailed lobbyist Jack Abramoff probably cost Reed the race, though he was never charged with wrongdoing. Aside from potential illegality, the episode seemed to permanently damage Reed’s basic credibility — Christian Coalition faithful were not being mobilized to protect the word of God, but were being exploited in service of Reed’s petty greed.

None of the speakers or attendees appeared bothered by Reed’s past transgressions. Speeches frequently began with praise of Reed — Cantor thanked him for “bringing conservatives together in these difficult times.” That’s particularly forgiving praise, since according to various news accounts, Reed was connected to a campaign to destroy Cantor during the 2000 Republican primary for his seat, an effort Cantor described as “despicable, underground and unquestionably anti-Semitic.” Similarly, Reed introduced Barbour, who has apparently forgiven Reed for attacking him at the behest of Abramoff in 2002.

U.S. News and World Report reported that Joel Vaughan, author of the recently published book, The Rise and Fall of the Christian Coalition, says he doubts that fallout from Reed’s ties to Abramoff will hamper his new group’s ambitions. “Conservative Christians still need an organization to rally around,” says Vaughan, who worked at the Christian Coalition in the 1990s. “The enthusiasm definitely waned during eight years of a friendly president.” 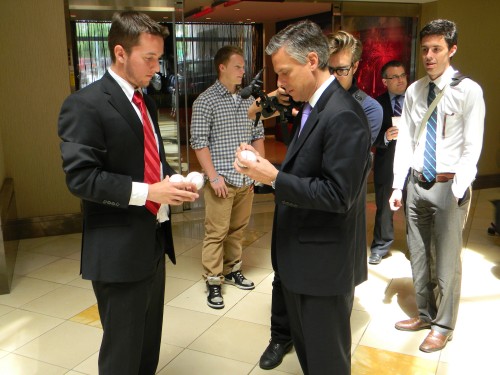 Jon Huntsman, possible presidential contender, former Ambassador to China under President Barack Obama and former Republican governor of Utah, signs his autograph to one of his admirer’s baseball.

Various news agencies were in attendance such as  The Nation Magazine, which wrote the following account: “It would be hard for most of the politicians at Faith and Freedom 2011 to hold Reed in contempt for dressing up his own narrow priorities in Christian language, however—that’s also what they were there to do. For two days, speakers gamely tried to paint Republican policy priorities and Biblical principles as inextricably linked.”

Indeed, Congressman Paul Ryan (R-WI), for example, defended his Medicare-killing budget and small-government ethos by explaining, “Our rights are not given to us from government–our rights are ours naturally, given by God.” After Ryan spoke, Tony Perkins informed the crowd that single mothers were the largest voting bloc in favor of a welfare state.

Fox News reported that the “anti-big government dominated speeches were ringing loud and clear for two days.” Congresswoman Michele Bachmann (R-MN), a potential presidential candidate, went on the record in her speech to pledge from government officials to use their political power to create a more Christian country, as they define it. Bachmann, who received probably the most raucous reception, and closed her speech with a two-minute prayer “on behalf of our nation”, moved seamlessly from an angry attack on government intrusion and “Obamacare” to promoting her work getting a bill passed in Minnesota that prohibited gay marriage.

The Christian Science Monitor stated that the “real purpose of Faith and Freedom 2011 was defeating President Obama in 2012, one-term president, was possibly the most-issued phrase from the podium. Everything else, including matters of faith, was incidental.”

Rev. Derrick Harkins, of the Nineteenth Street Baptist Church in Washington, DC, said Wallis and the other faith leaders there were promoting a much different faith-based message than Reed’s group: “A nation is judged, our Bible says, by how we treat the poorest and most vulnerable. Period,” Harkins said. “That’s what God says to us. That is God’s instruction to us. To be faithful to God, we have to protect poor people.”

James Salt, a member of the progressive coalition group, Catholics United, attempted to give Congressman Paul Ryan a bible with passages about the poor underlined as Ryan hurriedly left the hotel after his speech. “He just laughed and walked away,” Salt told San Diego County News afterwards.

Danny R. Johnson is a freelance journalist based in Washington, DC