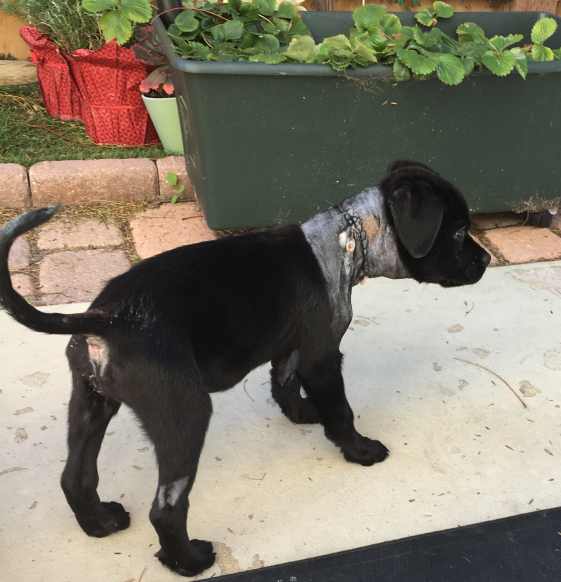 Bindy the puppy has been adopted.

ENCINITAS–A three-month old puppy that was abandoned last week then survived surgery to remove a rubber band embedded deep in her neck is scheduled to be adopted Thursday morning at the Rancho Coastal Humane Society in Encinitas.

When information about the puppy named “Bindy” was released questions about how to adopt her poured in. Adoption officials reviewed the applications then contacted a Carlsbad family that plans to finalize her adoption late Thursday morning.

“We knew that Bindy’s story would touch the hearts of animal lovers,” says Kathy Zerkle, V. P. of Adoption Services at Rancho Coastal Humane Society. “She was found last Wednesday night by a San Diego man who took her to the County of San Diego Department of Animal Services facility in Mission Valley. The next morning DAS medical officials saw an abscess around her neck. They performed surgery, removing a small rubber hand that had cut deep into her skin. That probably saved Bindy’s life.”

Bindy is described as a Labrador Retriever mix. When she was transferred to RCHS through the Friends of County Animal Shelters program her footing was unsure and she had “drains” in her neck to aid in her healing. She went into private foster care in the home of a RCHS staff member.

“Bindy is pretty resilient. Without the rubber band around her neck she began eating and within a few days she was running and playing…probably for the first time in her life,” Zerkle says.

She is scheduled to be spayed next week. Following the surgery and medical exams to make sure she’s 100% healthy Bindy will go home to begin a new life with her new family.

“We’ll never have the details about how Bindy ended up in this situation, but by telling the story we hope to keep it from happening again. Every animal deserves a tomorrow,” Zerkle added.