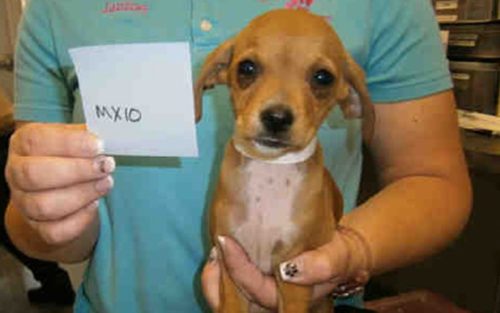 One of the rescued puppies from the border.

SAN DIEGO–Twenty-three puppies and adult dogs are now in the care of County Animal Services after being found inside an SUV that was intercepted at the San Ysidro border crossing Saturday.

U.S. Customs and Border Protection feared the animals were dead upon first discovering them because they weren’t moving. Once their crates were moved into the fresh air, many of the dogs appeared to revive but two weren’t responding so animal control officers took them to an emergency veterinary facility.

Animal control officers said it was very hot and humid inside the vehicle. The driver of the SUV, Daniel Canedo, told them the dogs had last been given water at 11 a.m., about five-and-a-half hours before he was stopped at the border.

“The driver said he picked up the dogs in Tijuana and was taking them to Los Angeles but we don’t know what the final outcome of these animals would have been,” said County Animal Services Director Dawn Danielson. “Under federal regulations, it’s illegal to import animals under six months old for resale.”

Canedo relinquished the dogs to County Animal Services and currently they are housed at the animal care facility in Bonita. The two taken to the emergency veterinary hospital were treated and released to join the other puppies on Sunday at the County’s shelter in Bonita.

The puppies range in age from two to about 6 months of age and are of various breeds and mixes. Among them are shepherds, Labradors, Chihuahua, hounds and terrier blends. The department’s rescue partners are taking some of the puppies. The rest, including the three adult dogs will be available for adoption Tuesday.
Canedo was charged with 23 misdemeanor counts of animal cruelty. If found guilty, he could face six months in county jail, a $1,000 fine or both for each count.