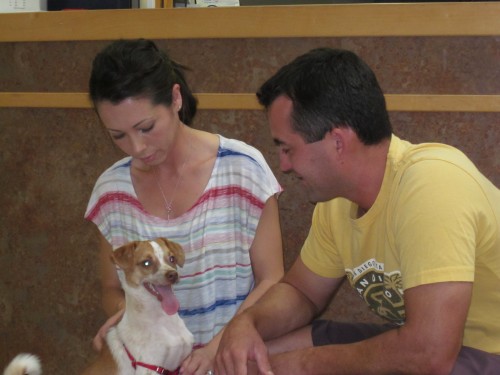 SAN DIEGO–Buzz and Woody, the two puppies that were stung numerous times by a swarm of bees and whose plight captured the hearts of people across the country, have been adopted by two new families.

“After the suffering these two puppies endured because of the unknown person who tied them to a tree under an active bee hive, the department is happy to announce both Buzz and Woody have been adopted into wonderful, loving families,” said Director of Animal Services Dawn Danielson.

The department received about two dozen applications for the puppies and evaluated all of them to see which families could provide the best homes. One application came from a Pennsylvania woman who heard a news story about the dogs and donated $1,000 to the department’s Spirit Fund to help pay for their veterinary care.

Before the final decision, the top adoption candidates were invited to interact with the Jack Russell terrier mix puppies. As a result, Shay and Broc Mushet of Rancho Peñasquitos adopted Buzz. The puppy will have a mentor as the Mushets are already the proud parents of another Chihuahua mix, 18-month-old Oscar. Dinah and Richard Hamilton of Mira Mesa adopted Woody. The little dog will always have a lap to sit in as Dinah is a retired County employee.

“For those people who were not chosen to adopt these puppies, the department encourages them to adopt a different pet from our shelters,” said Danielson. “All of our animals have a story of sadness and loss; and these families and other residents can make a difference in the lives of these pets by welcoming one into their homes.”