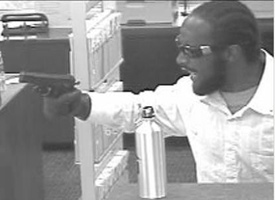 On Monday at approximately 11 a.m., three males entered the Citibank, located at 3777 Avocado Boulevard, in the unincorporated area of La Mesa, California. Witnesses describe two of the men as black males. The third individual was described as a light-skinned black or Hispanic male.

Once inside, the black male with the beard and long-sleeved white shirt displayed a handgun and ordered everyone in the bank to get down. Everyone, including the customers, dropped to the floor immediately. The two other suspects climbed over the teller windows while the first suspect remained out front. One victim was hit by a cabinet door and kicked in the head as one suspect climbed back over the counter. Two other victim tellers were also stepped on or kicked in the head as they were ordered to the floor.

The suspects were observed fleeing in a white four-door sedan. There is a report that a possible female witness was entering the bank as the suspects fled. That person has not been identified.