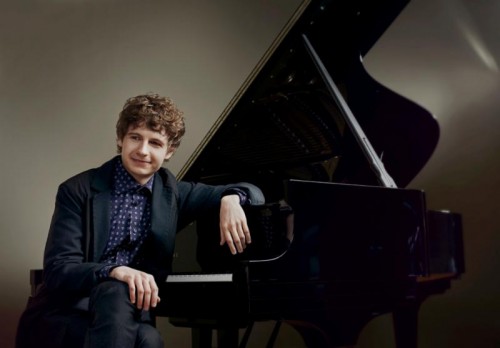 Acclaimed Russian pianist Pavel Kolesnikov will be the third and final young artist to perform in the Center’s Discovery Series, presented in partnership with the La Jolla Music Society. Photo: California Center for the Arts, Escondido

ESCONDIDO–Having garnered accolades the world over, including being named the 2012 Honens Prize Laureate, 25-year-old Russian pianist Pavel Kolesnikov’s star is most certainly on the rise. The young up-and-comer in the classical music world will share his talents with local audiences when he takes the Center Theater stage at the California Center for the Arts, Escondido (the Center) in April.

His performance will be the final installment of the nonprofit cultural organization’s Discovery Series, presented in conjunction with the La Jolla Music Society.

Due to the popularity of its classical music programming, the Center added the Discovery Series to its roster for the 2013-14 season. Like the La Jolla Music Society series of the same name, the Center’s Discovery Series highlights emerging artists who are making a name for themselves on the world stage.

Kolesnikov will perform in the Center Theater at 3 p.m. on Sun., April 13. Following the Russian pianist’s Wigmore Hall debut in January 2014, The Telegraph gave his recital a rare five-star review and called it “one of the most memorable of such occasions London has witnessed in a while.” Since becoming Laureate of the Honens Prize for Piano in 2012, Kolesnikov has been winning hearts around the world.

To get their discounted rate, Center members should call the Ticket Office at (800) 988-4253. Special group rates are also available.  Tickets can also be purchased online at www.artcenter.org/performances.