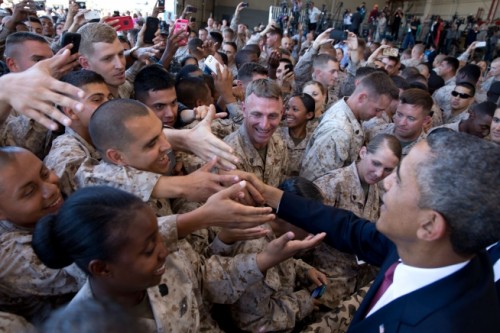 CAMP PENDLETON–President Barack Obama made a brief visit to troops at Camp Pendleton on Wednesday afternoon.

“I’ve been looking forward to this visit because — and this is a little tricky to say this — but my family and I, we’ve got a special place in our hearts for the Marine Corps,” Obama said. “Now, part of it is because every day at the White House, we’re surrounded by Marines.”

Congresswoman Susan Davis, Congressmen Darrell Issa and Dana Rohrabacher also joined the president at the base.

Obama’s two-day visit of California concluded with an appearance on “The Tonight Show with Jay Leno” in Burbank.