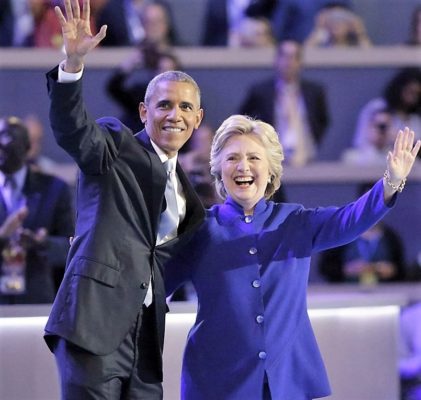 President Barack Obama came out swinging for Hillary Clinton who made a surprise entrance on the stage after his electrifying defense for her presidential bid. (Photo courtesy of the Democratic National Committee)

PHILADELPHIA – The major highlight of last night’s Democratic National Convention was undoubtedly President Barack Obama’s unabashed validation of Hillary Clinton to be his successor. “I can say with confidence there has never been a man or a woman — not me, not Bill, nobody — more qualified than Hillary Clinton to serve as president of the United States of America,” Obama said to a roaring crowd — and a gleeful-laughing Bill Clinton — at the Democratic National Convention. Obama said his former secretary of state is a better qualified candidate than even he or her husband, former President Bill Clinton, had been when they sought office.

Even as a nasty and sour attitude permeates the presidential campaign, Obama attempted to connect the optimism that propelled him into office some eight years ago.

In remarks that defended his own record as a progressive leader as much as they boosted the candidate who could maintain them, Obama argued that two terms of a Democrat weren’t enough to finish the work he started.

“I have confidence, as I leave this stage tonight, that the Democratic Party is in good hands,” Obama said to dispersed exhalations among the delegates. “My time in this office hasn’t fixed everything; as much as we’ve done, there’s still so much I want to do.”

Ahead of Obama’s speech, aides said President Obama was intent on highlighting the aspects of Clinton’s record he feels have been overlooked through the years, including her work protecting children and her dogged work as his secretary of state.

President Obama had debated whether he should do a policy speech but decided to talk about themes of America given how eccentric the election has become. He also acknowledged that many Democrats remain cautious of their party’s nominee.

“Hillary’s got her share of critics,” Obama said. “She’s been caricatured by the right and by some folks on the left; accused of everything you can imagine — and some things you can’t. But she knows that’s what happens when you’re under a microscope for 40 years. She knows she’s made mistakes, just like I have; just like we all do. That’s what happens when we try.”

And he offered an affirmation to the supporters of Sen. Bernie Sanders, many of whom remain bitterly disappointed in their candidate’s loss to Clinton in this year’s primary contests.

“Nothing truly prepares you for the demands of the Oval Office,” Obama said. “You can read about it. You can study it. Until you’ve sat at that desk, you don’t know what it’s like to manage a global crisis, or send young people to war. But Hillary’s been in the room; she’s been part of those decisions.”

The instinct for change after eight years of White House control is one reason it’s so difficult for a party to hold the White House for a third consecutive term. In the past six decades, that’s happened only once, in 1988, when then-vice president George H.W. Bush was elected to succeed the popular President Reagan during a time of prosperity.
This time, Obama’s approval rating in recent months have risen above 50%, the highest levels for him in nearly three years and a crucial dividing line.

That is crucial for Clinton, who of course wants to win.