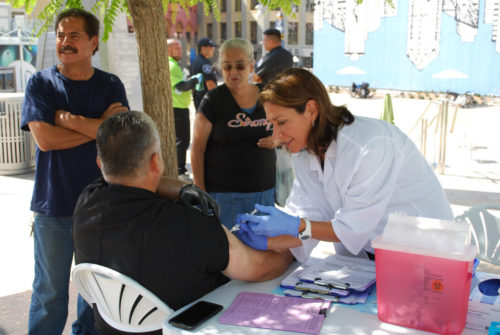 SAN DIEGO–Residents at the Volunteers of America (VOA) Renaissance Treatment Center in National City during a specific time period may have been exposed to hepatitis A, the County Health and Human Services Agency reported Friday.

HHSA recommends vaccination for anyone who was a resident at the facility at 2300 E. 7th Street, National City anytime from June 19 through June 21. Those who are already vaccinated or who have had hepatitis A do not need vaccination.  Residents at other VOA locations were not exposed, according to County of San Diego Communications spokesman Tom Christensen.

San Diego County has an ongoing outbreak of hepatitis A that has slowed significantly in 2018. Only 13 of the outbreak’s 590 cases were reported this year.  The majority of people who have contracted hepatitis A during the outbreak have been homeless and/or illicit drug users.

The hepatitis A vaccine is also available at many local clinics and pharmacies. Call 2-1-1 San Diego to locate a County public health center or clinic.

Hepatitis A symptoms include sudden abdominal pain, fever, fatigue, diarrhea, nausea, headache, dark urine, light-colored bowel movements, and vomiting, followed by yellowing of the skin and eyes. Symptoms may appear from 15 to 50 days after exposure, with the average time being about one month. Sickness can range from a mild illness lasting a few weeks to a serious illness lasting several months. In rare cases of hepatitis A infection, those with a pre-existing severe illness or a compromised immune system can progress to liver failure.

The best way to prevent hepatitis A is by getting vaccinated. Due to the current outbreak, the following groups are strongly recommended to get the hepatitis A vaccine: