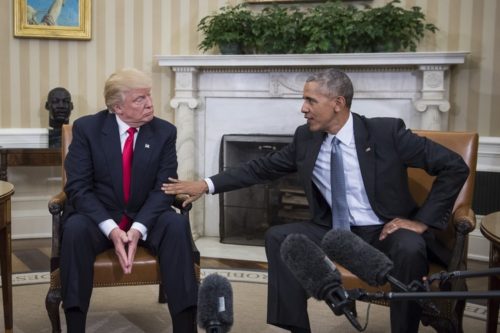 President-elect Donald J. Trump, the billionaire businessman who spear headed the Obama birther movement, seated alongside President Barach Obama whom he will secede on January 20, 2017. (Photo courtesy of the White House Press Gallery)

WASHINGTON – As the votes rolled in on Tuesday evening, November 8, and all the way into the wee hours of Wednesday morning — and the cable news and networks’ maps took on overwhelmingly a Republican sea of red, it was clear that Donald J. Trump was on his way to a decisive victory. Even though he did not win the popular vote against Hillary Clinton, his 290 Electoral College votes was sufficient. President elect Trump’s victory seemed an only slightly diluted version of the three previous Republican triumphs with Ronald Reagan in 1980-1988, and George H.W. Bush’s victory in 1988, and George W. Bush’s victories in 2000 and 2008.

The triumph was a personal validation for President elect Trump, who had managed during the campaign to transform his bombastic and some would say – “racist and sexist” message of change to a beleaguered and angry electorate into a winning and unorthodox strategy that voters found comfortable. It was also an expression of general “contempt with Hillary Clinton’s 30 years of drama and corruption” as the Trump people put it, and the voter’s disgust with immigration, the rise of Muslim extremists, global trade deals, and a total breakdown of trust in the political institutions, are the issues which drove the Trump train straight into the White House.

Unlike the President Barack Obama triumphs of 2008 and 2012, however, President elect Trump’s win represented no endorsement of a specific set of policies. Nor was there any consolidation of the fundamental realignment in party loyalties that had seemed possible after past Reagan’s successes. Instead, President elect Trump’s was a split-ticket victory won by a candidate who raised many peripheral issues but neither sought nor received a mandate to make the tough choices necessary to rescue the nation from its mountain of distrust and fear of one another.

As a result, the buoyant sense of new possibilities for the nation that is supposed to accompany a victory was all but absent. Even the victor, standing before cheering supporters in New York City on election night, seemed mildly subdued after winning the office he has somewhat coveted. Addressing an energized crowd at the Hilton hotel in midtown Manhattan, Trump announced that his Democratic opponent, Hillary Clinton, had called to concede the 2016 race.

“She congratulated us on our victory,” Trump said, adding, “We owe her a major debt of gratitude for her service to our country.” The tone stood in stark contrast to the dark rhetoric the New York businessman frequently employed on the campaign trail, where he entertained angry crowds that demanded she be imprisoned.

Breaking Down the Numbers

Trump won white voters by a margin almost identical to that of Mitt Romney, who lost the popular vote to Barack Obama in 2012. (Trump appears likely to lose the popular vote, which would make him only the fifth elected president to do so and still win office.) White non-Hispanic voters preferred Trump over Clinton by 21 percentage points (58% to 37%), according to the exit poll conducted by Edison Research for the National Election Pool. Romney won whites by 20 percentage points in 2012 (59% to 39%).

By 53% to 41%, more men supported Trump than Clinton (the 12-point margin is identical to the margin by which women supported Clinton). The advantage for Trump among men is larger than the 7-point advantage Romney had in 2012 and much different than in 2008, when men preferred Obama over McCain by a single point. Trump’s performance among men is similar to that of George W. Bush in the 2004 and 2000 elections, where he won men by 11 points in each election.

Among whites, Trump won an overwhelming share of those without a college degree; and among white college graduates – a group that many identified as key for a potential Clinton victory – Trump outperformed Clinton by a narrow 4-point margin.

Trump’s margin among whites without a college degree is the largest among any candidate in exit polls since 1980. Two-thirds (67%) of non-college whites backed Trump, compared with just 28% who supported Clinton, resulting in a 39-point advantage for Trump among this group. In 2012 and 2008, non-college whites also preferred the Republican over the Democratic candidate but by less one-sided margins (61%-36% and 58%-40%, respectively).

Older voters (ages 65 and older) preferred Trump over Clinton 53%-45%. This is roughly the same advantage for the Republican candidate as in 2012 when older voters backed Romney over Obama 56%-44%.

With Clinton performing worse among young voters than Obama, the overall difference between the preferences of the youngest and oldest voters is smaller than it was in both the 2012 and 2008 elections.

In the wake of Hillary Clinton’s stunning loss, progressives are moving quickly to fill the power vacuum left in the Democratic Party and eyeing a takeover of the Democratic National Committee (DNC), with Rep. Keith Ellison gaining momentum as the left’s apparent candidate of choice to lead it.

The next chair of the DNC will play a key leadership role as the party builds itself back from defeat, and their election early next year will be a key test in the struggle for control of the party between the so-called establishment and a more populist wing that largely backed Bernie Sanders in the primary.

Ellison has not declared his candidacy and it’s unclear who else might run, but Sen. Bernie Sanders and a number of progressives groups indicated they favored Ellison Thursday.

“You cannot be a party which on one hand says we’re in favor of working people, we’re in favor of the needs of young people but we don’t quite have the courage to take on Wall Street and the billionaire class. People do not believe that. You’ve got to decide which side you’re on,” Sanders told the AP in an interview endorsing Ellison.

Donna Brazile, the Democratic strategist who took over as interim chair after Rep. Debbie Wasserman Schultz abruptly stepped down from the post this summer, has said she will not run for a full term as DNC chair.

The party will embark on an official post-mortem project to analysis the results of the election and make recommendations for the future, but there has been no timeline set for when that autopsy process will begin or who might lead it, according to a DNC official.

Rep. Raul Grijalva, the other co-chair of the Progressive Caucus, declined to speak about Ellison’s candidacy Thursday, but called for the kinds of changes at the DNC that Ellison might bring.

“There has to be a complete restructuring of that committee,” he told NBC News. “The DNC cannot continue as it is as if nothing occurred.”