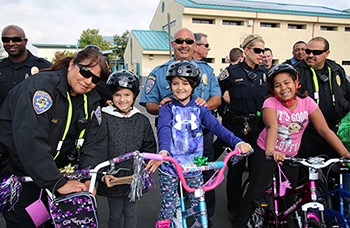 What these officers were really doing was grabbing a new bicycle that each of these students was receiving – and delivering it to them, helmet and all.

“Remember this day – you’re going to have a blast with your True Blue Buddy,” said Chief Rueben Littlejohn to the students before the big surprise. “Our officers stopped what they were doing today because they wanted to spend time with their buddies…but they wouldn’t tell me what they wanted to do. It’s a surprise, they told me.”

Each of the students received a new bicycle and helmet, then participated in a bike rodeo put on by the San Diego Bike Coalition and enjoyed lunch with their buddy, courtesy of San Diego Unified’s Food and Nutrition Services.

“Our students were so excited to see their buddies bringing out bicycles. Many have never had their own bike before,” said Porter Elementary Principal Lillie McMillan. “But this program is about much more than bicycles. It’s an opportunity for our students to develop relationships with the officers and have someone they can look up to and receive mentoring from. It’s a special program with great possibilities.”

The primary goal of the True Blue Buddies mentorship program is to provide support through small group mentoring, as well as to help facilitate and build positive relationships between police officers and students at an early age. In addition to mentoring, they hold 3-4 events throughout the year, including a shopping trip, Thanksgiving feast and an end-of-year lunch. This is the second year of the program.