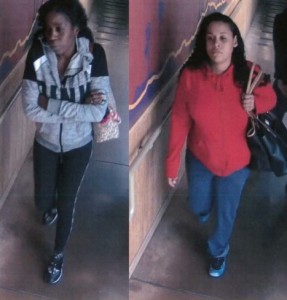 Surveillance photos of the female suspects.

SAN DIEGO–Crime Stoppers and investigators from the San Diego police department are asking for assistance from the public to help identify and locate two unknown women wanted for grand theft and credit card fraud.

On March 21, at approximately 11:45 a.m., the women worked together while inside the Whole Foods Market located at 711 University Avenue in San Diego.

The first woman distracted the victim who was shopping inside the store while the second woman took the victim’s purse from her shopping cart. The victim’s credit cards were then used at Target to make fraudulent purchases. Investigators believe these women may be involved in similar cases in the San Diego area.

Both suspects are described as black females, between 30 to 40-years-old, with medium builds, and long dark colored curly hair.