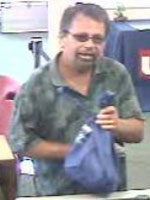 The same unknown man is believed to be responsible for the July 5 robbery of the Wells Fargo Bank located at 5610 Lake Murray Boulevard in La Mesa.

Witnesses describe the robber as a white male in his mid-50s, approximately five feet, seven inches tall approximately 210 to 215 pounds with gray and black hair, goatee beard with mustache, and acne scars on his face.