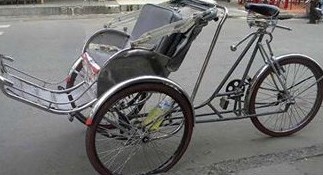 SAN DIEGO–A Cyclo bike stolen January 28 from the front driveway area of a residence in the 3400 block of Central Avenue in San Diego has been found, San Diego police said Wednesday.

On February 5, investigators from the San Diego Police Department Gang Unit conducted a probation search of a residence in the 4100 block of Van Dyke Avenue within Mid City Division. During that search, the bike was located and subsequently turned over to Mid-City detectives.

The $2,000.00 bike, owned by the Little Saigon Foundation, was shipped to the United States from Vietnam. The bike was stored at a residence for about one year in anticipation of being exhibited at the Lunar New Year Festival. The bike is a cultural art piece and the cultural value of the bike is priceless.

Authorities say a suspect is not in custody at this time.