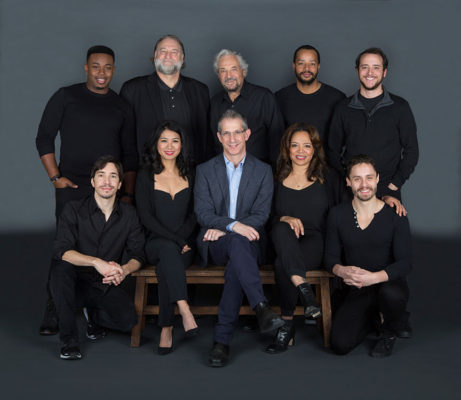 Erna Finci Viterbi Artistic Director Barry Edelstein will direct, continuing the pair’s long creative relationship that started in the 1990s with “WASP and Other Plays and The Underpants.”

Paris, 1904: The Lapin Agile, beloved watering hole to struggling artists and would-be geniuses, welcomes two soon-to-be legends for one extraordinary night. Pablo Picasso and Albert Einstein, whose egos are as big as their intellects, spar with the regulars and each other about art, science, inspiration, love, and the promise of the 20th century. Throw into this mix a mysterious visitor with a penchant for blue suede shoes, and you’re in for a brilliant and witty evening in the theatre.

The stellar cast will include Philippe Bowgen (world premiere of Branden Jacobs-Jenkins’s War, Off Broadway’s The Changeling) as Pablo Picasso; Donald Faison (Dr. Christopher Turk on “Scrubs,” “The Exes,” Clueless) as Freddy; Kevin Hafso-Koppman (Globe’s Macbeth and Love’s Labor’s Lost, current student of the Shiley Graduate Theatre Program) as Visitor; Liza Lapira (“Dollhouse,” “Dexter,” “Huff”) as Suzanne, Female Admirer, and Countess; Hal Linden (Globe’s The Twenty-seventh Man, “Barney Miller,” Tony and three-time Emmy Award winner) as Gaston; Justin Long (Dodgeball, He’s Just Not That Into You, “New Girl,” “Ed”) as Albert Einstein; Ron Orbach (Globe’s The Twenty-seventh Man, Clueless, Broadway’s Laughter on the 23rd Floor and Chicago) as Sagot; Marcel Spears (title role in Othello and Bottom in A Midsummer Night’s Dream at Classic Stage Company) as Charles Dabernow Schmendiman; and Luna Vélez (“How to Get Away with Murder,” “Dexter,” Broadway’s Into the Woods) as Germaine.

“I’m thrilled to welcome Steve Martin back to the Globe for the third time in as many years,” said Erna Finci Viterbi Artistic Director Barry Edelstein, who will direct the production. “Picasso at the Lapin Agile is a smart and hilarious play that asks serious questions about art, science, and genius while it cracks goofy jokes about history, romance, and how to bake a pie in the shape of the letter e. A star-studded and brilliant cast comes to San Diego to ring in 2017 with laughter, and I cannot wait for our audience to see the fun and surprises we have in store.”

Steve Martin (Playwright) began his career on “The Smothers Brothers Comedy Hour” (1967–1969), for which he earned his first Emmy Award for Outstanding Writing Achievement in Comedy, Variety or Music in 1969. In the mid-1970s, Mr. Martin shone as a stand-up on “The Tonight Show Starring Johnny Carson” and NBC’s “Saturday Night Live.” His films are widely popular successes and are the kind of movies that are viewed again and again: “The Jerk” (1979), “Planes, Trains & Automobiles” (1987), “Roxanne” (1987), “Parenthood” (1989), “L.A. Story” (1991), “Father of the Bride” (1991), and “Bowfinger” (1999). As an author, Martin’s work includes the novel An Object of Beauty; the play “Picasso at the Lapin Agile”; a collection of comic pieces, “Pure Drivel”; a bestselling novella, Shopgirl; and his memoir, Born Standing Up. His writing has also appeared in The New Yorker. Martin is an accomplished, Grammy Award-winning, boundary-pushing bluegrass banjoist and composer who has won three Grammys for performing and composing. He has earned numerous honors including an Academy Award, five Grammy Awards, an Emmy Award, the Mark Twain Prize, and the Kennedy Center Honor. Martin and Edie Brickell’s musical “Bright Star” premiered at The Old Globe in 2014, played a limited engagement at The Kennedy Center, and received acclaim in its Broadway run at the Cort Theatre. In addition to five Tony Award nominations, Bright Star received Outer Critics Circle Awards for Outstanding New Broadway Musical and Outstanding New Score. Martin’s “Meteor Shower” made its world premiere at the Globe in 2016.

Barry Edelstein (Director, Erna Finci Viterbi Artistic Director) is a stage director, producer, author, and educator. Widely recognized as one of the leading American authorities on the works of Shakespeare, he has directed nearly half of the Bard’s plays. His Globe directing credits include “The Winter’s Tale”; “Othello”; the West Coast premiere of novelist Nathan Englander’s play “The Twenty-seventh Man”; and the world premiere of Michael John LaChiusa and Sybille Pearson’s musical “Rain.” He also directed “All’s Well That Ends Well” as the inaugural production of “Globe for All,” which tours the works of Shakespeare to diverse communities throughout San Diego county. As Director of the Shakespeare Initiative at The Public Theater (2008–2012), Edelstein oversaw all of the company’s Shakespearean productions as well as its extensive educational, community outreach, and artist-training programs. At The Public, he staged the world premiere of “The Twenty-seventh Man”, “Julius Caesar,” “The Merchant of Venice,” “Timon of Athens,” and Steve Martin’s “WASP and Other Plays.” He was also Associate Producer of The Public’s Broadway production of “The Merchant of Venice” starring Al Pacino. From 1998 to 2003 he was Artistic Director of Classic Stage Company. Edelstein’s other Shakespearean directorial credits include “The Winter’s Tale” at Classic Stage Company; “As You Like It” starring Gwyneth Paltrow; and “Richard III” starring John Turturro. His additional credits include the Lucille Lortel Award-winning revival of “Arthur Miller’s All My Sons”; the world premiere of Steve Martin’s “The Underpants,” which he commissioned; and Molière’s The Misanthrope starring Uma Thurman in her stage debut. Edelstein has taught Shakespearean acting at The Juilliard School, New York University’s Graduate Acting Program, and the University of Southern California. His book Thinking Shakespeare is the standard text on American Shakespearean acting. He is also the author of Bardisms: Shakespeare for All Occasions.

“Picasso at the Lapin Agile” will play February 4 to March 12 on the Donald and Darlene Shiley Stage in the Old Globe Theatre, part of the Globe’s Conrad Prebys Theatre Center. Opening night is February 9 at 8 p.m. Tickets start at $29 and are on sale now to the general public.