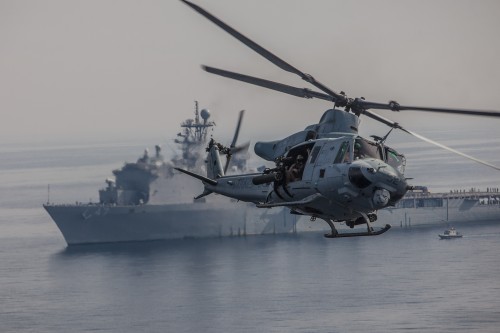 SAN DIEGO–The Peleliu Amphibious Ready Group relinquished its duties in the U.S. 5th Fleet area of responsibility to the Kearsarge ARG on April 4.

The Peleliu ARG is comprised of the 15th Marine Expeditionary Unit and Amphibious Squadron Three, which served as a U.S. Central Command theater reserve force, providing support for maritime security operations and theater security cooperation efforts in the U.S. 5th Fleet area of responsibility for more than five months.

The Peleliu ARG deployed Sept. 17, 2012, from Naval Base San Diego, Calif., and conducted several exercises with Gulf Coast countries designed to strengthen partnerships, lay a framework for regional security and build upon skill sets that led to successful interoperability and a secure future for the region. This training also kept the unit prepared to serve as a theater reserve and crisis response force throughout the region.

“It has been my privilege to command the 15th MEU as we served as America’s away team in the U.S. 5th Fleet AOR,” said Col. Scott D. Campbell, commanding officer, 15th MEU. “Our Marines and Sailors demonstrated their tenacity and resiliency during the fast-paced work-up that began more than a year ago. During our time in the AOR, our maritime warriors stood ready to support any number of missions across the range of military operations to resolve conflict, conduct humanitarian assistance or combat the enemy in remote, austere environments that would otherwise be inaccessible.

Following the turnover, the Peleliu ARG will depart the U.S. 5th Fleet AOR and return to Camp Pendleton and Naval Base San Diego.

“We had many successes,” said Capt. Shawn Lobree, commander, Amphibious Squadron Three. “We conducted a lot of very valuable unit level training but more importantly we supported a lot of real world missions and operations such as counter-weapons proliferation, special forces mission support, and contingency security reinforcement for several embassies and consulates, to name a few.”

Relieved by the Kearsarge ARG and the 26th MEU, the Peleliu ARG continues its deployment into the 7th Fleet area of responsibility. The Peleliu ARG and embarked 15th MEU provide a combat ready force for maritime interest of the U.S. and its allies in the Asian-Pacific region.